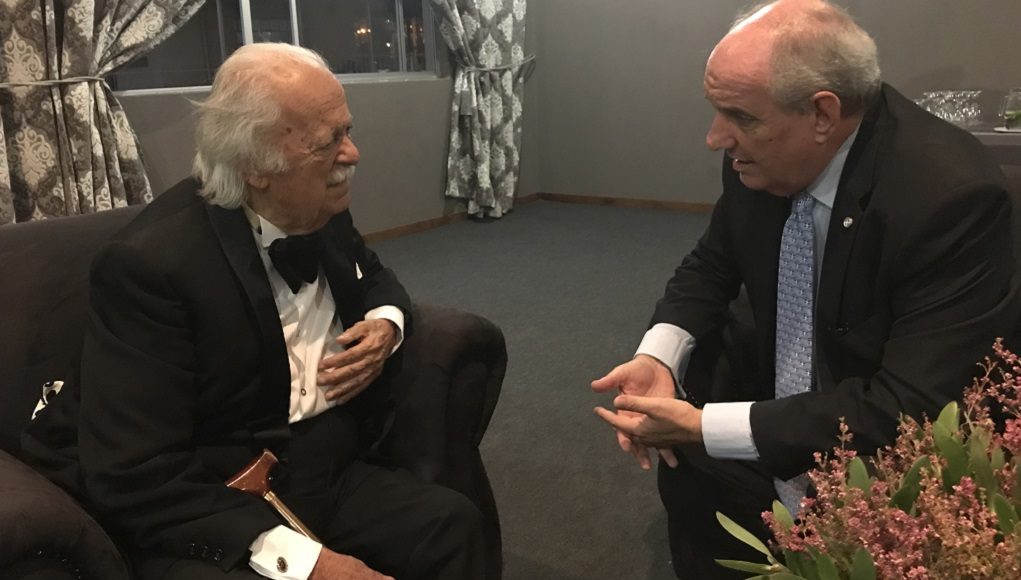 Bizos was Nelson Mandela’s lawyer and one of the three writers of South Africa’s Constitution. The event to celebrate Bizos’ approaching 90th birthday was organized by the Federation of Hellenic Communities and Societies of South Africa.

Archbishop Damianos of Mount Sinai and Raithu, and the ambassdors of Greece and Cyprus were present at the event in which Quick read a greeting by President of the Hellenic Republic, Prokopis Pavlopoulos.

Bizos is loved in Soutrh Africa, and a few days ago he was honored by the country’s government by having a wing named after him in the Apartheid Museum in Johannesburg. His name is linked to the struggle against racism, xenophobia, and apartheid and the values of solidarity, human rights and democracy.

In Pavlopoulos’ greeting, the honoree was described as a “fighter for freedom” and “a citizen of the world”, while the Constitution of the Republic of South Africa is described as “one of the most progressive constitutional texts in the field of human rights and civil liberties worldwide.”

George Bizos’ contribution to the Republic of South Africa

Born in Messenia in 1927, George Bizos was forced to end up in Egypt in 1941, after he and his father tried to help seven New Zealender soldiers escape Nazi-occupied Peloponnese and flee to Crete. As a refugee he was sent to South Africa and landed in Durban. The local Greek community helped him enter the University of the Witwatersrand, where he studied law.

Bizos joined the Bar in Johannesburg in 1954 and from 1963 – 1964 he was part of the team that defended Nelson Mandela, Govan Mbeki and Walter Sisulu. The accused were sentenced to life imprisonment, but spared the death penalty. Bizos believes that he may have contributed to Mandela’s avoidance of the death penalty, by making it appear that Mandela was not seeking martyrdom.

In the 1970s Bizos helped start a Greek school, called SAHETI. It embraced Hellenism, yet was non-exclusion, even during the heart of apartheid.

In 1990 Bizos became a member of the African National Congress (ANC) Legal and Constitutional Committee, and at Convention for a Democratic South Africa (CODESA) he served as advisor to the negotiating teams and participated in drawing up the Interim Constitution.

He was involved in the drafting of legislation, and particularly the Truth and Reconciliation Bill and amendments to the Criminal Procedures Act, to bring it into line with Chapter 3 of the constitution, guaranteeing fundamental human rights to all citizens of South Africa.