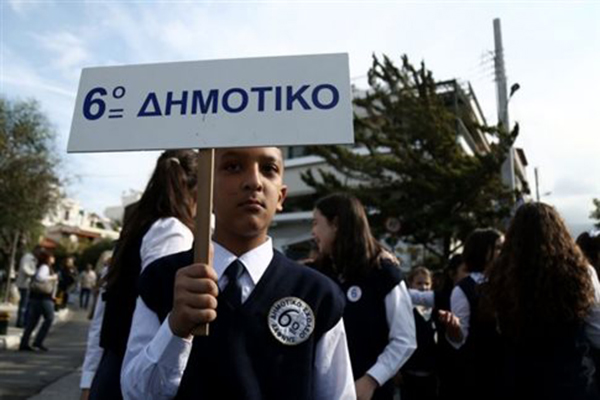 The Greek ministry of Education has launched an investigation into the curious -and potentially racist- incident of an 11-year-old Afghan student who was evidently denied to carry the Greek flag in his student parade, despite being drawn to do so.
Amir, a student in a Dafni public school won the draw to carry the flag in his school parade but someone unilaterally decided that the Afghan student wouldn’t accept to participate in the religious part of the “OXI Day” celebrations; on family religious grounds, thus offering him the school’s signpost instead.
Amir’s parents subsequently stated they had no objection to their son carrying the Greek flag inside an Orthodox church, since he is regularly attending the local church sermons.
According to the latest reports, someone made the call to refuse Amir’s flag bearing duties without consultation with the boy’s parents. What the ministry is attempting to establish is whether that person was a City of Athens employee, or an NGO member.
Apparently this person decided that the 11-year-old would not be able to participate in the religious part of the celebration, thus recommending to the school principle that a second draw was required – which the principle asked for.
In an interview with AMNA, concerning the new process of the draw with which the flag-bearer is selected under the new law, Amir had stated that he wasn’t aware of the process, but was very happy to carry the flag in the parade.
He added that upon the announcement of his draw, all his Greek student-mates had offered him their congratulations, indicating they were happy with it.