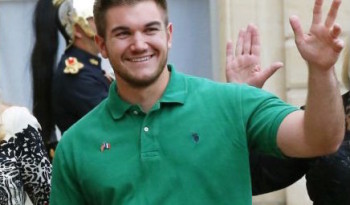 Clint Eastwood’s newest film, “15:17 to Paris”, based on the real-life actions of Alex Skarlatos, Anthony Sadler, and Spencer Stone, who thwarted a terrorist attack on a Paris-bound train over two years ago, will premiere internationally on February 9, 2018.

The events depicted in the film take place on August 21, 2015, on a Thalys train traveling from Amsterdam to Paris, in which three Americans on vacation (two of them members of the military) end up being international heroes after stopping a terrorist brandishing a gun in the train carriage, then tieing him up and protecting the other passengers from harm.

Before the creation of this movie a book had already been written about the story of the three men, which partly forms the basis for this script.

In a surprising choice for this kind of wide studio release, the three men will be playing themselves in the movie, rather than being portrayed by actors. However, young actors have been hired to play younger versions of the men, so though not much is known about the movie, we know the story will dive deep into Skarlatos’, Stone’s, and Sadler’s past.

Sue Kroll, president of worldwide marketing and distribution for Warner Bros., who will be releasing the movie, said “Clint Eastwood is one of our most prolific and enduring filmmakers and we are thrilled to continue our longtime collaboration with him as we bring his next film to the screen. This is both a touching story of three lifelong friends and a compelling tale of patriotism and heroism, and we felt this would be a great window for audiences everywhere to experience this uplifting true story.”

As a director, Eastwood has often shown an affinity for patriotic and heroic films, so “15:17 to Paris” is right in his wheelhouse.

We look forward to seeing the heroic Alex Skarlatos and his friends on the big screen next year.