GRNews
GreekReporter.comGreeceThessaloniki Remembers Great Fire of a Century Ago with Reenactment Event (video) 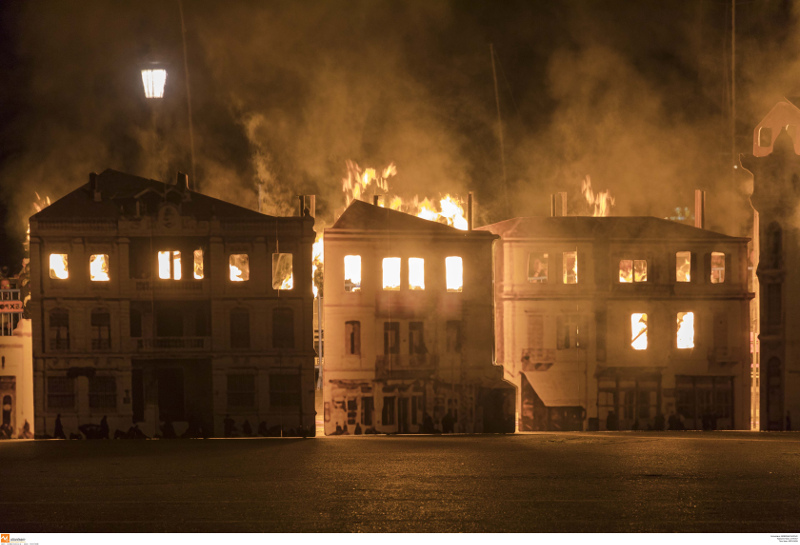 With an event called “The spark that turned into a blaze”, Thessaloniki comemorated the great fire that changed the city’s face one hundred years ago.
The fire that almost destroyed the entire city on August 18, 1917 was reenacted in a four-hour event with the participation of 450 people and many special effects.
A visual model of homes on the waterfront called “Memory Scraτch” and the large-scale model of the coast were delivered to the flames with the help of special effects specialist Michalis Samiotis. The visual effects were accompanied by the Orchestra of Military Music of the Third Army Corps and the blaze was the last part of the great event organized by Parallaxi and the City of Thessaloniki.
Earlier, the Thessaloniki Club building was transformed to a gigantic video mapping, while actors told stories based on true testimonies.
The multimedia show started at 6 in the afternoon from Mouschoundi square, where the great fire started on August 18, 1917 (August 5, according to the old calendar). A group of 40 actors and the “Pleiades” choir narrated the story of the great fire, with Dimitris Naziris interpreting the role of Ernest Hebrard, the French architect, archaeologist and urban planner who designed the reconstruction of the burnt part of the city.