Tsipras Appeals to French Businesses: Invest in Greece, you won't Regret it 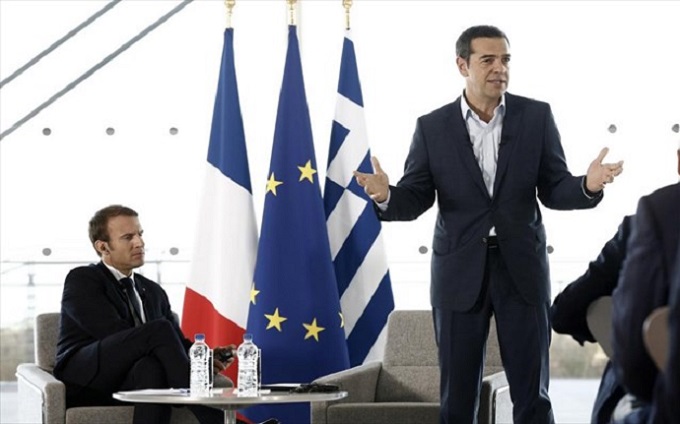 Greek Prime Minister Alexis Tsipras urged French businesses on Friday to invest in Greece, as it emerges from crisis, and assured them that they would not regret it.
“Greece is an opportunity… a real opportunity,” Tsipras told French business leaders accompanying French President Emmanual Macron on a two-day trip to Athens.
“You won’t regret your choice,” he said.
Tsipras added that attracting investment was a top priority for his government, which aims to reduce the jobless rate and make Greece financially independent in 2018, when the country’s third international bailout expires.
The Greek premier said he was determined to implement reforms in the public sector and improve the business climate.
He invited the French businessmen to specify what problems they are experiencing in Greece and what prevents them from investing in the country.
After seven years of crisis, Greece’s economy could grow by more than 2 percent, Tsipras said.
On his part France’s president has called for greater European investment in Greece to help offset the cash-strapped country’s increasing reliance on non-European countries, notably China.
Emmanuel Macron said Greece was “forced” to choose non-European investors “because the Europeans were not there.”
That, he added, showed that “Europeans have no faith in Europe.”
More than 140 French and Greek business leaders are participating in the talks, including the CEOs of French giants Total and Vinci.
Read also: French Businesses Pump Up Talk About Heavy Investments in Greece

Regeneration of Iconic Faliro Bay in Athens Gets Green light