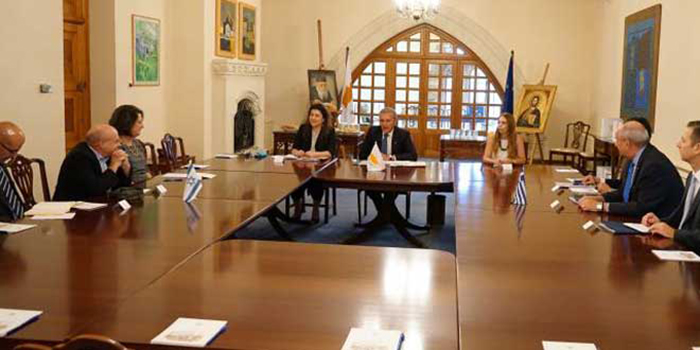 Greece, Cyprus and Israel held their third trilateral meeting in Nicosia on Monday, to evaluate actions aiming to coordinate their respective diasporas.
Greece’s Deputy Foreign Minister Terence Quick, Presidential Commissioner for Overseas Cypriots Fotis Fotiou, and Jewish Agency Chairman Natan Sharansky also attended a round table discussion with youth representatives from the respective diasporas. In statements later, at the Presidential Palace, the three officials said they also discussed their forthcoming projects.
The next trilateral meeting will be held in Israel, at the end of autumn or beginning of winter and the first major project is expected to be revealed in the spring of 2018.
Natan Sharansky conveyed the appreciation of the Israeli Prime Minister towards the President of Cyprus and the Prime Minister of Greece, for their contribution in upgrading the dialogue and cooperation between the three countries.
The dialogue between the representatives for relations with the diasporas is part of the very important trilateral dialogue between Israel, Greece and Cyprus, said the Chairman of the Jewish Agency and added that “it is natural for us to be friends and partners, [being] the real democracies in this very problematic region”.
Terence Quick noted from his part that the third meeting on diaspora matters was very decisive and that projects that will be put in action have matured. Some important actions are being planned for the future, added the Deputy Foreign Minister, responsible for Greeks abroad.
Initiatives developed by the three countries aim at helping the young members of the diaspora understand their duty towards their countries, but also towards this region, where Greece, Cyprus and Israel are beacons of stability, Quick added.
Source: CNA