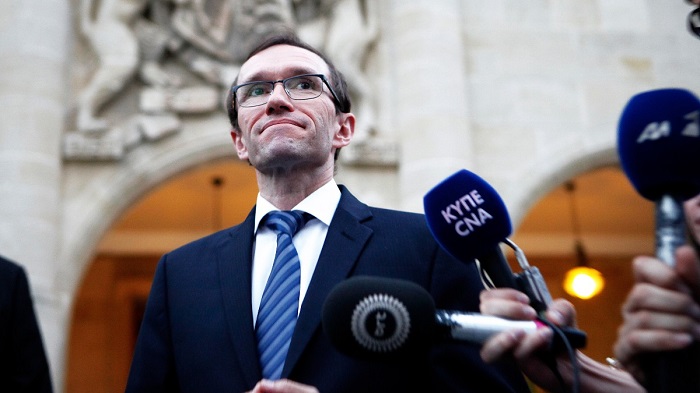 UN Secretary General`s Special Adviser on Cyprus Espen Barth Eide will arrive in Cyprus on August 2nd and on August 3rd will have separate meetings with Cyprus President Nicos Anastasiades and Turkish Cypriot leader Mustafa Akinci.
On Thursday evening a farewell reception will take place, at Ledra Palace, in the Nicosia buffer zone, as Eide will leave his post as Special Adviser before running in the Norwegian parliamentary elections, scheduled for September 11.
CNA has learned that both leaders, Anastasiades and Akinci, as well as other politicians, members of the diplomatic community, the civil society and others have been invited to attend the reception. Most probably this will be Eide`s last visit to the island as the UNSG`s Special Adviser on Cyprus.
According to the office of the UN Spokesperson in Cyprus, Eide will meet with Anastasiades on Thursday morning at 9 and then at 11 with Akinci.
In a written statement he issued on July 26, Eide said that following the briefing to the United Nations Security Council, he held consultations with Anastasiades and Akinci with whom he shared the results of his trip to New York and listened to their reflections on the outcome at the Crans-Montana peace talks.
In addition, he said, he held discussions with other key stakeholders, including the diplomatic community in Nicosia and representatives of the European Union and the international financial institutions supporting the process.
He further noted that in the coming days he would inform the UN Secretary-General of the reflections of both sides to date, and that he would return to Cyprus to continue these consultations.
Eide also said that he remained convinced that the best chance for a mutually-agreed solution in Cyprus is through the established United Nations parameters.
UN-peace talks at the Swiss resort of Crans-Montana took place between June 28-July 6 but failed to reach any fruitful results.
The talks, under the auspices of the UN, aim at reuniting Cyprus, divided since the 1974 Turkish invasion, under a federal roof.
Source: Cyprus News Agency