GRNews
GreekReporter.comGreek NewsCyprusAthens Replies to Eide, Accuses Him of Acting as Turkey's Spokesperson

Athens Replies to Eide, Accuses Him of Acting as Turkey's Spokesperson 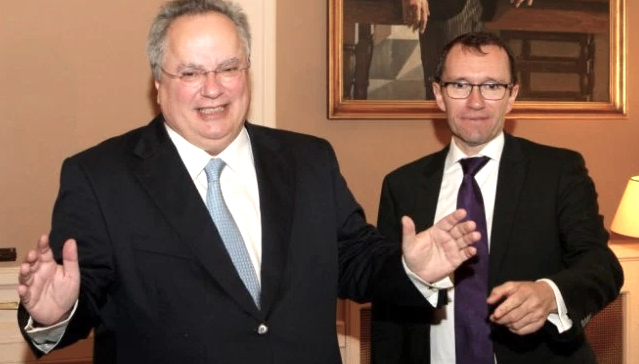 Responding to interviews given by United Nations Special Adviser on Cyprus Espen Barth Eide regarding the events in Crans Montana and the failure of the Cyprus talks, Greece’s foreign minister on Sunday issued an announcement strongly criticising Eide for speaking more as a spokesperson for Turkey than as a UN mediator.
“It appears that Mr. Eide is making statements as someone who intends to resign from the post of UN mediator in favour of taking up what would apparently be the more satisfactory position of spokesperson for the Turkish government. What he said in the same interview, that “Mr. Cavusoglu didn’t put it exactly that way,” is indicative of the shift he is making,” the announcement said.
It also challenged the accuracy of Eide’s statements and his decision to talk to Greek-language media only:
“We wonder why Mr. Eide is giving interviews only to Greek-language print media. We are anxious to see when he will speak to a Turkish newspaper and explain Turkey’s responsibility for the collapse of the talks.
“Meanwhile, we ask him to clarify something. During the dinner of 6 July, did the Turkish Foreign Minister in fact accept the abolition of ‘rights of intervention’ and the Treaty of Guarantee from the first day of the Cyprus problem’s resolution, as Mr. Eide clearly stated in one of his many interviews?
“Because it is our conviction that the Turkish Foreign Minister stated the opposite both in the Conference and publicly. Unless Mr. Eide was at another Conference or wanted to hear something else.”
In an interview given to the newspapers “Nea Selida” and Cyprus’ “Phileleftheros” that was published on Sunday, meanwhile, Greek Foreign Minister Nikos Kotzias noted that some parties appeared “put out” by the “isolation of Turkey’s illegal aspirations” achieved at Crans Montana.
“There was consistency between what we proposed two and a half years ago and what we did in Switzerland. In fact, in contrast with what certain parties are claiming, on the issue of the abolition of the Treaty of Guarantee and, by extension, the abolition of any rights of intervention of the guarantor powers, we succeeded in carving out the widest possible consensus among Cyprus, Greece, the EU, the UN Secretary-General himself and, for most of the time, the UK. I can’t understand why this isolation of Turkey’s illegal aspirations bothered some people,” he said.
According to Kotzias, the biggest longstanding problem “was and is that we could not ’emancipate’ the Turkish Cypriots away from Turkey…that they suffered and are suffering just like the Greek Cypriot refugees.”
Asked about Ankara’s goals, the foreign minister said that Turkey “aimed to legitimize its occupation” and by preserving the right of intervention, “to intervene unilaterally throughout the island whenever it saw fit.”
Kotzias was equally critical, however, of those “who raged at our refusal to grant such a right to Turkey,” rights that were contrary to all principles of democratic political culture and encapsulated the accusations that the Turks made against the putschist officers in Turkey. These same officers had commanded the occupation forces in Cyprus, he added, “as we saw from the arrests of a number of officers in occupied Cyprus.”
“So, there are some people who – instead of calling us maximalists – would do well to explain why giving Turkey the right to intervention throughout the island is a solution to the Cyprus problem,” Kotzias said, pointing out that the UN Secretary General had ruled out such rights as “inconceivable”.
At another point in the interview, Kotzias noted that, whereas the Turkish Cypriots had at first spoken of the need for the occupation forces to remain so that they could feel secure, they were later “underscoring that Turkey must become the guarantor of Cyprus’ security against third countries.”
“The second position is completely different from the first, and very revealing as to Turkey’s true intentions,” he added.
He also repeated claims that the Switzerland conference “was not well prepared” by Eide, whereas Greece and Cyprus were “prepared, productive, prudent.”
“At the beginning of the negotiations, I introduced a term: “Cyprus as a normal state”. Through this term, I tried to alter the manner in which the discussion had been carried out until then. I underscored that we must agree on what kind of state we want Cyprus to evolve into following the agreement, in the “new state of affairs”. That Cyprus must become a normal state; that is, independent and sovereign, without guarantees from third countries or occupation troops.
No one objected to this. In fact, I had the honour of the UN Secretary-General’s adopting the term. I then explained that, if we all agree that this is our goal, then all of the problems – particularly with regard to the external aspect of the Cyprus problem, which involves/concerns Greece – must be resolved from the perspective of this goal.
My critics, in contrast with the EU and the UN, want a semi-colonial Cyprus. And this is the root of all our differences,” he said.
(Source: ANA-MPA)