TechNews
GreekReporter.com Greece One Dead, Snow on Olympus and Damages as Summer Storms Sweep Over...

One Dead, Snow on Olympus and Damages as Summer Storms Sweep Over Greece

Stormy summer weather that has been sweeping across Greece since late Sunday night with strong winds and heavy rainfall has left one man dead and caused several damages; snow accumulated on Olympus mountain as temperatures dropped to single digits in certain areas.
Larissanet.gr reported snowfall on Olympus mountain, while in Amfilochia a 45-year-old man was killed when hit by lightning.
Strong gusts in Rio Port cut ferry cordages and boats set loose caused damages on nearby smaller boats. A whole operation was set by the Rio port authority to tie the ships again. 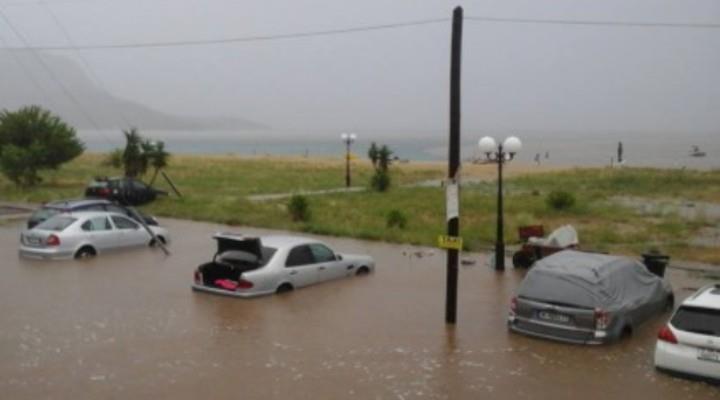 Several homes flooded in Patras, Pyrgos, Kiato, Agrinio and other cities and towns, while the Kalavryta area was covered in hail. In Patras, the rainfall and gusts caused the roof of a natatorium to collapse. The fire department also rescued several drivers who were trapped in their cars in country roads.
According to the Athens National Observatory weather forecast, rainstorms will continue through late Monday afternoon in Attica, the Ionian Sea, northern Aegean and Euboea.
The phenomena, with the exception of Thrace and the northeastern Aegean Sea, will be strong on the ground. Then rains and storms will occur mainly on the central and southern regions, central Macedonia, the central and northern Aegean and Crete. In the area of ​​Pagasitikos, Sporades, central Greece and Euboea, very strong weather phenomena are expected until the early hours of Tuesday.
The temperature in eastern Macedonia and Thrace will range from 18 to 27 degrees Celsius, in the rest of Macedonia from 12 to 26, in Thessaly and Epirus from 17 to 25, in Central Greece and Peloponnese from 18 to 28, in the Ionian Islands from 20 To 28, and in the Aegean from 19 to 32.