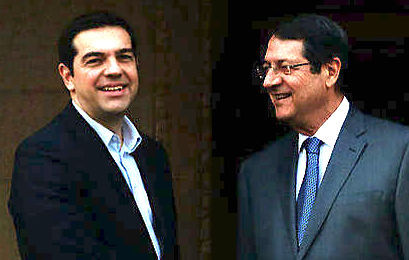 The draft document of Espen Barth Eide, UN Secretary General Special Adviser on Cyprus, and the coordination of Athens and Nicosia ahead of the Cyprus summit, which starts on June 28 in Crans Montana, Switzerland, dominated the meeting of Cyprus President Nicos Anastasiades with the Greek Prime Minister Alexis Tsipras in Brussels on Thursday.
The draft document, which was handed over to the parties involved on Wednesday, is divided into four pillars, including the positions of the parties on the different levels of security, constitutional, internal and external security, and the implementation of the solution.
Anastasiades will also meet with British Prime Minister Theresa May and German Chancellor Angela Merkel.
(Source: ANA-MPA)