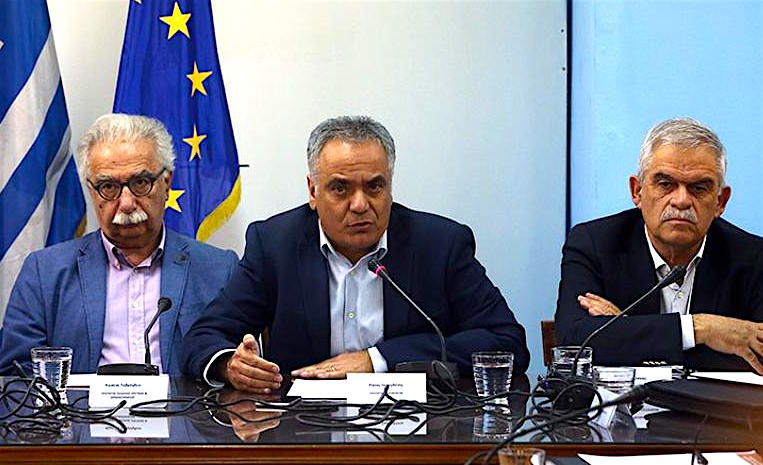 The government on Friday announced a series of measures aimed to promote the social integration of Roma communities in Menidi and elsewhere in Greece, in a bid to tackle runaway crime among these groups.
In a press conference also attended by Acharnes municipality and Attica region officials, Interior Minister Panos Skourletis, Education Minister Costas Gavroglou, Alternate Civil Protection Minister Nikos Toskas, Alternate Social Solidarity Minister Theano Fotiou and Alternate Health Minister Pavlos Polakis, as well as Deputy Sports Minister Giorgos Vasiliadis, presented their plan to improve Roma access to education, employment, benefits, healthcare and sports.
They also announced plans to change the legal framework for carrying weapons, following the tragic death of an 11-year-old boy in what is believed to have been an accidental shooting caused by firing shots in the air during a celebration.
The measures announced will include placing social workers in schools with Roma children to liaise with parents, reduced class sizes and mandatory all-day schooling. Meanwhile, the government is also mulling the entry of Roma school-leavers into some tertiary education courses — such as teaching degrees, social worker or police academies — without having to sit university entrance exams.
Toskas also pointed to tighter policing in the Menidi area and announced sweeping police operations in areas with drug-dealing problems in the coming days. Polakis said the health ministry will seek to ensure the vaccination of the Roma population and send two mobile healthcare units to the area.
(Source: ANA-MPA)