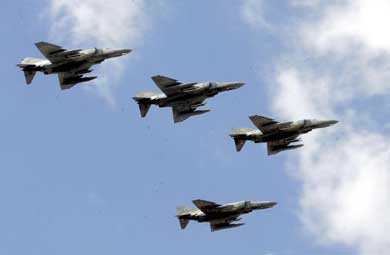 Six Turkish fighter jets entered Athens FIR on Wednesday without submitting a flight plan, the National Defense General Staff (HNDGS) said.
The first pair of Turkish F-16’s entered the Greek capital’s FIR at 15:14 and at 15:27 flew over the islet of Mavria, located west of Levitha and east of Kinaros, at 25,000 feet. The two air force planes exited at 16:05.
At 15:16, four more Turkish fighter jets entered Athens FIR without submitting a flight plan and at 15:28 flew over Kinaros at 27,000 feet and ten minutes later over one of the two Sofrana islets, located northwest of Karpathos, also at 27,000 feet. The Turkish formation exited the FIR at 16:09.
In all incidents, the Turkish aircraft were identified and intercepted by Greek fighter jets that took off from Skyros and Souda.
(Source: ANA MPA)