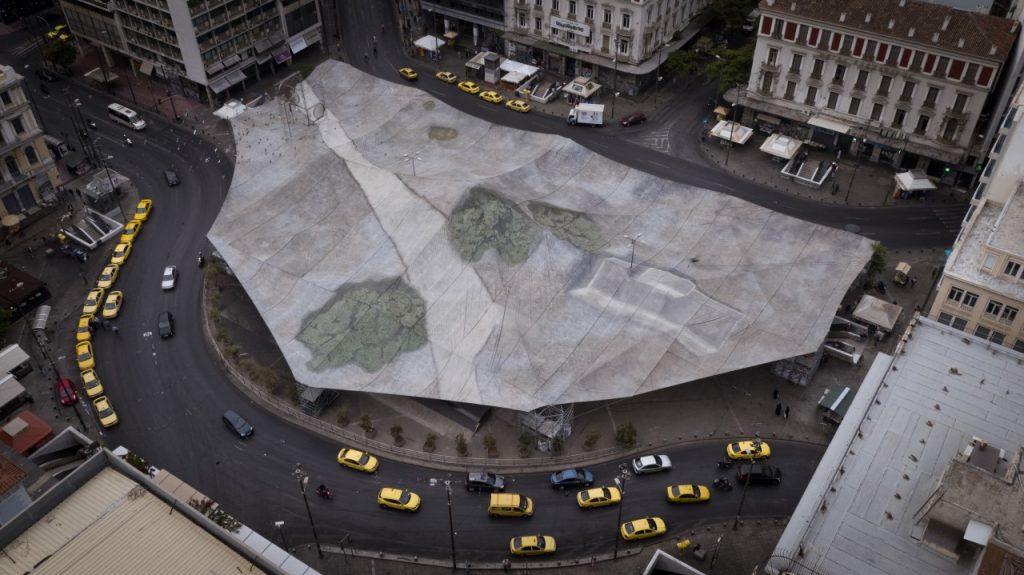 German artist Gregor Schneider has made the famous Omonoia Square in Athens “invisible” to intruders and Google Maps as part of an art festival.
Schneider has been invited to Athens for the Fast Forward Festival, sponsored by the Onassis Cultural Centre. His project is to make Omonoia Square “disappear” from view, even from the all-seeing eye of Google Maps.
The German artist, who has been awarded with the Golden Lion in the Venice Biennale in 2001, used the camouflage technique to transform the emblematic square into a shelter and neutral zone, invisible by any intruder.
Schneider covered the whole square from above and, in his own words, made a great intervention in the capital’s urban landscape, “shifting its center, the navel of Athens, to the minute of meeting the visible with the invisible and art with ontology.” His source of inspiration is the famous camouflaged sites of World War II, such as the U.S. West Coast aircraft manufacturing factories, which during the war were covered with giant camouflage pieces of canvas in fear of bombardment from Japanese aircraft. Camouflaging the landscape changes the appearance and perception of reality, Schneider says.
The concept is taken further to the notion of fantasy cities of refuge, where the concepts of monitoring, control, visibility and recognition lose their importance.
According to Schneider, the whole philosophy of his work balances in the minute point of the encounter of the visible with the invisible, as he explores the relations of private space with public space and imagination with reality.

Greek, Armenian and Syriac genocide committed by the Ottoman Empire in the beginning of the 20th century were recognized by the Netherlands earlier in the week.
Cyprus

The Cyprus Church on Tuesday called for the withdrawal of the country’s controversial entry into this year’s Eurovision song contest titled “El Diablo.”
Charity