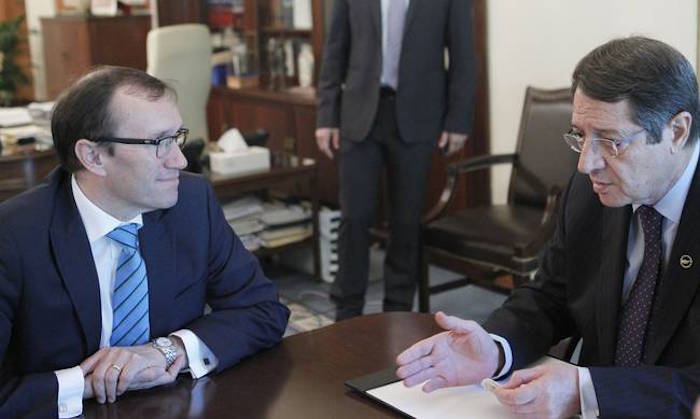 Cyprus President Nicos Anastasiades urged the UN’s special adviser on Cyprus, Espen Barth Eide, to refrain from making ill-advised statements on the negotiations over Cyprus’ future, saying he should hear all sides of the argument and not push for a hasty solution.
“The less said, particularly from the side of the UN’s special envoy on Cyprus, Mr. Espen Eide, the better,” Anastasiades was quoted as saying on the sidelines of a charity event in Nicosia on Sunday.
“He should have learned from his predecessors who caused significant problems to either one or the other community,” he said and expressed his sadness that Eide tends to adopt the positions of one side without hearing or simply conveying the different views.
“[He] should realize that statements or threats will only achieve the opposite results from the ones intended,” he continued, noting that the UN envoy “tries not to see the threats against the Cypriot Republic and the climate of distrust created through the various Navtex issued and the presence of [Turkish seismic survey vessel] Barbaros [in the Cypriot EEZ],” he said, noting the “real threat” to Cyprus’ sovereignty and territorial integrity.
Anastasiades said Eide is “in a rush”, as he has been in the past. “I had warned him that by raising expectations, all we will bring is disappointment to the Greek-Cypriots, because in the end we found ourselves facing the intransigence of positions that do not allow us to achieve the desired result.” He then attributed Eide’s rush to the general elections which will be held in Norway in September.
“What I’m interested in, is for the UN’s secretary-general to know that talks are being held under threats and this is unthinkable; it’s a violation of international law,” he said.
(source: ana-mpa)

The "Lap Pool House," a modern house built on a slope of the Cycladic island of Tinos, is nominated for an EU award for Architecture.
Greek News

Before the breakout of the War of Independence, Alexandros Ypsilantis decided that the first blow against the Ottomans should be outside Greece