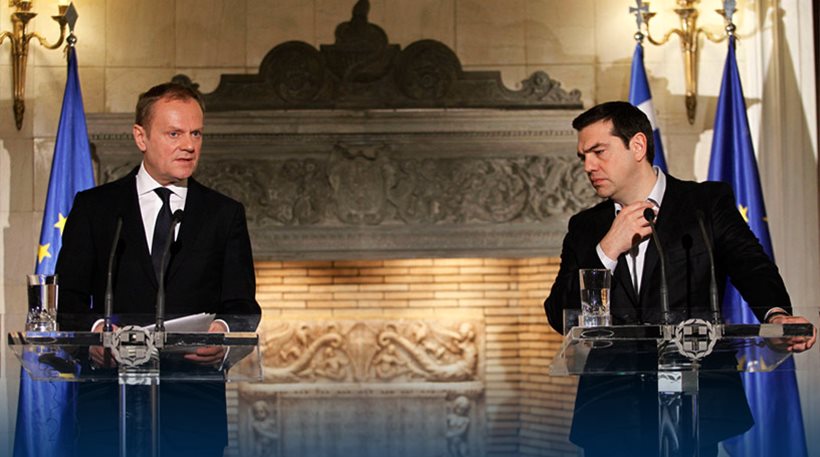 “We are close to completing the second review… but we are far from talking about a success story in Greek economy,” European Council President Donald Tusk said on Wednesday.
The European official spoke with Greek Prime Minister Alexis Tsipras in Athens. The two men discussed the refugee issue, the Cyprus peace talks, the threat of terrorism in Europe,unity in the EU and Greece’s bailout.
“We need to take important decisions in the European Union to leave the crisis behind,” the Greek prime minister said during their meeting at the Maximos Mansion.
“All Member States must shoulder their responsibilities to keep Europe united and safe,” Tsipras also said.
Regarding the Greek economic crisis, Tusk said that today he is more optimistic than yesterday that the second evaluation will close and expressed the hope that tomorrow will be better than today.
“Due to the determination and pragmatism displayed, we are very close to completing the second assessment,” he said, addressing the Greek prime minister and expressed the view that, “we are still far from talking about a success story in the Greek economy.”
Earlier Tusk met with President of the Hellenic Republic Prokopis Pavlopoulos, who congratulated him on his second election as head of the European Council.
“I believe that Athens is the most authentic, the most genuine capital for all Europeans,” Tusk said. I am happy to say that I believe there is real progress in talks between (European) partners about the situation in Greece. And I truly believe that this is the point there should be practical demonstration of solidarity, in the negotiations,” Tusk said.
In the joint press conference that followed the meeting, Tsipras asked for an emergency meeting of euro zone finance ministers in case there is no agreement on the bailout program review in Friday’s Eurogroup.
The Greek prime minister used dramatic tones to describe the stalling of negotiations between Athens and creditors, saying that the fate of Greek people is hanging in the balance.
Tsipras accused creditors for placing illogical demands on the table, thus putting hurdles in negotiations. He said that “this is the time to end this game playing.” He also said that the creditors’ stance is putting Europe’s unity at risk.