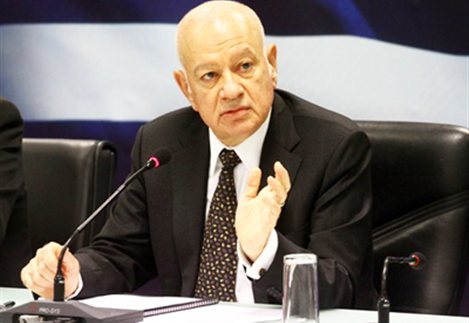 Greece’s Economy Minister Dimitris Papadimitriou and U.S. Ambassador in Athens Geoff Pyatt on Monday attended a working meeting organized by the Athens Stock Exchange and the American-Hellenic Chamber of Commerce. The meeting was held to coordinate action in preparation for the 6th Greek Investment Forum taking place in New York on June 21-22 and a trip to Washington that will precede this.
Others attending the working meeting included the senior executives of firms listed on the Athens stock exchange, members of the chamber and representatives of the Hellenic Federation of Enterprises (SEV) and the Federation of Industries of Northern Greece (SBBE).
The Greek Investment Forum is a joint initiative of the Athens stock exchange and the American-Hellenic Chamber of Commerce that began in 2012 in order to inform prospective U.S. investors of the business and investment opportunities available in Greece.
The forum allows the U.S. investment community to carry out b2b meetings in New York with representatives of Greek firms and learn about their economic growth and prospects. There are also presentations on macroeconomic issues and the growth prospects of the Greek economy.
In 2017, the forum will be combined with a visit by a business delegation to Washington on June 18-20 and the opportunity for the Greek business community to take part in the “2017 SelectUSA Investment Summit,” as well as a series of meetings with bodies, such as the US Chamber of Commerce, US Council of competitiveness and others.
(source: ana-mpa)