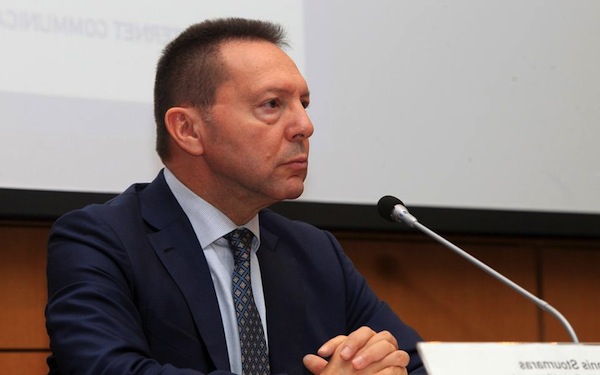 The Greek economy could grow by 2.5 % this year on conditions, the Bank of Greece said in its Annual Report, presented by governor Yiannis Stournaras on Friday.
Based on current data, the country’s primary surplus in 2016 is expected to be around 2.0 pct of GDP, while a target for a primary surplus of 1.75 pct of GDP this year is considered to be feasible. The central banker, however, warned there were still risks related with economic growth prospects. The first category of risks is related with instability in international environment, while domestic uncertainties and risks are related mostly with delays in implementing an economic program, as reflected in difficulties to complete a second review of the program.
The Bank of Greece governor noted that if these delays were to continue, they could raise serious hurdles to the expected growth, with negative consequences in economic climate and opening a new cycle of uncertainty over completion of the program. This uncertainty could increase if Greece failed to be included in an European Central Bank’s QE program, he added. All these could undermine confidence and avert efforts to attract foreign investments — a necessary precondition for economic growth. The central bank said that risks were also related with delays in implementing reforms aimed to boost competitiveness, in sectors such as the electricity energy market.
The central banker said that the most serious hurdle to be gradually lifted was excessive taxation of enterprises and individuals. An overshooting of a fiscal target on primary surplus in 2016 was mostly attributed to higher tax revenue and less to a cut in public spending. Stournaras said that the current fiscal policy mix operated adversely to economic growth, it contributed in raising private sector arrears to the state and encouraged tax evasion and informal labor.
Referring to non-performing loans, the central banker said their reduction was the most significant challenge for the banking system, although he said it was encouraging the fact that NPLs fell to 106.3 billion euros at the end of 2016, from 107.6 billion at the end of the third quarter of 2016. He said that the goal was to reduce NPLs by 40 billion euros until the end of 2019, but noted that delay in legislating the necessary measures, combined with uncertainty related with a slow progress of negotiations with institutions to conclude a second review of the Greek program, raised risks over achieving this goal. Stournaras said that new non-performing loans grew in the first month of 2017.
(source: ana-mpa)