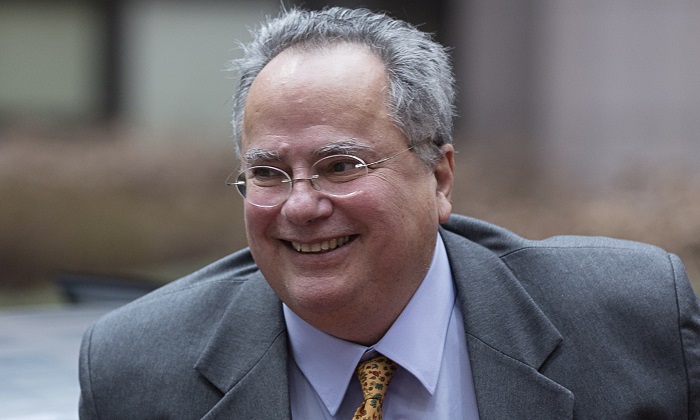 Foreign Minister Nikos Kotzias sharply criticized foreign and Greek press reports on Sunday that blamed him for the breakup of Cyprus talks in Geneva saying that the Turkish side had interrupted the talks unexpectedly.
Asked by the Athens-Macedonian News Agency (ANA) about reports published in the news website Politico, he said:
“Those who are their master’s voice — that is the Turks’– logically believe that a success in Geneva would be if we gave in to the Turks. If we legitimized their intervention rights and their ability to occupy part of Cyprus. We have a different view. We believe that European and international law must be applied, Cyprus must be granted its sovereignty, Turkish Cypriots must be granted the maximum possible rights and the maximum sense of security to Greek Cypriots.”
The minister was speaking from Paris, where he is participating in the one-day international Middle East peace conference.
He said those press reports contain a number of “distortions” in the events.
“For example they say that we interrupted the process, because the technical staff will start next week. This is not true. Both the UN Secretary General and [Cypriot] President [Nikos] Anastasiadis — as well as I — proposed continuing the Geneva Conference on Friday at a political level, as scheduled. It was very important to continue talks on a political level, because instructions had to be given on how the technical teams would work,” he said and continued, “this is because the Turks, who abandoned the negotiation and left on Friday morning, said they had no time for consultations and asked for the technical staff to meet. But our answer was that the technical teams cannot convene without instructions.”
Kotzias also said that political consultations and the political content of the conference had been scheduled for Thursday and Friday, but were canceled by Turkey.
“It’s amazing that there are European, Greek other media which adopt [the views of] those who cancelled the agreed procedure in Geneva. There are some people who believe they can do anything they want and then blame those who insist on the agreements,” he added.
Source: ANA-MPA