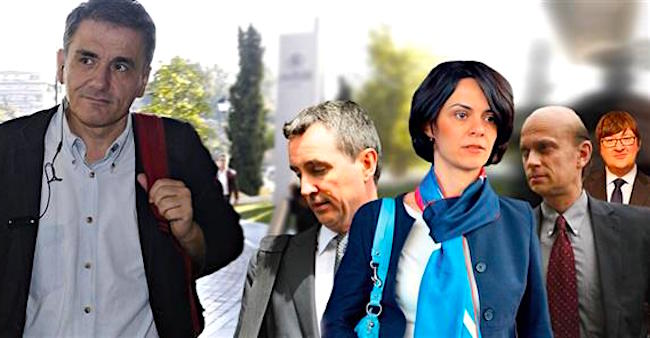 Saturday’s teleconference on the second bailout program review between Athens and creditors proved to be fruitless, as it turned out to only be an exchange of views with no further action taken.
The Greek side was stationed at the finance ministry with the participation of Finance Minister Euclid Tsakalotos, Labor Minister Efi Achtsioglou and Deputy Finance Minister Dinitris Papadimitriou.
After three hours of talks, all issues on the table remain open. Labor laws, fiscal gaps, non performing loans, energy and privatizations are still in negotiation, talks will resume next week. On Monday, the meeting of technocrats of the Euro Working Group will be a simple review of the negotiations so far, but in no case is there a staff level agreement in sight.
Lenders do not seem willing to back down on their demands, while at the same time the Greek side is reluctant to make further concessions on issues such as labor laws and privatizations.
As the deadline of the December 5 Eurogroup approaches and there is no progress so far, Prime Minister Alexis Tsipras is hoping for a political solution to the problem.
To that end, Tsipras had a telephone conversation with European Commission President Jean-Claude Juncker on Saturday. Reportedly, he will also ask for the support of German Chancellor Angela Merkel and French President Francois Hollande within the next days.