Secret Meeting of 4 Institutions on Greece Ends in Deadlock 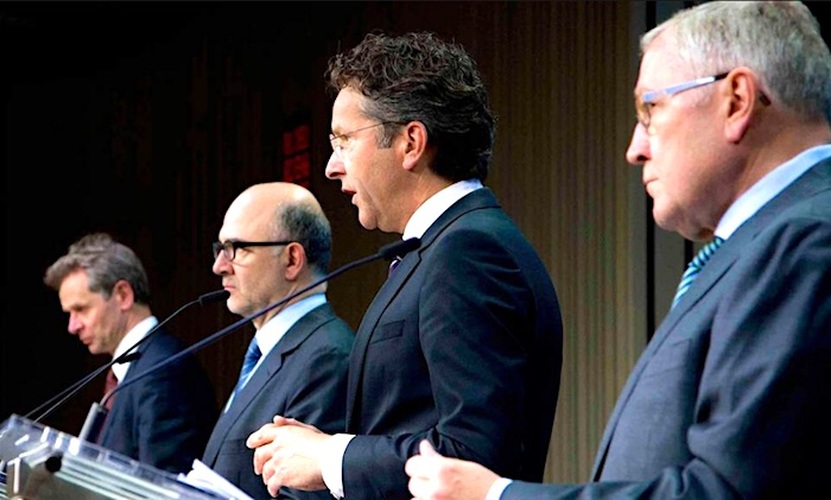 MNI newsagency reports of a secret meeting between officials of the four institutions responsible for Greece’s bailout program (European Commission, European Stability Mechanism, European Central Bank and International Monetary Fund). The Washington meeting, held in the framework of the IMF summit, ended in a “political deadlock.”
The meeting was attended by the IMF’s European Department Director Poul Thomsen, ECB Member Benoit Coeuré, EC Economic and Financial Affairs Director-General Marko Buti and ESM Chief Klaus Regling. Discussion centered on all possible scenarios that could pan out for Greece regarding debt, the second review and the IMF’s role in the bailout program.
Most differences concerned the sustainability of Greek debt, however, there was unanimous agreement regarding the necessity for a hard line to be kept in the second review. EU and IMF sources at the meeting said that there was an impasse regarding the debt. The meeting was kept at a technocratic level to explore different scenarios and consequences so that further discussions can lead to ending the stalemate. In the way of an agreement is the German stance that is directly opposite to that of the IMF regarding the need for debt relief.
Thomsen does not agree that contingency measures for Greece are enough to secure that targets are met by 2018, contrary to the views of the EU and Germany.
The MNI’s sources state that the EU desire to see the IMF participate in the new program is not as strong as it used to be despite the fact that many parliament’s in northern Europe, including Germany, ratified the third bailout on the condition that the IMF had involvement.
The IMF has made it clear, however, that participation would depend on debt sustainability and ties its involvement to debt relief for Greece.