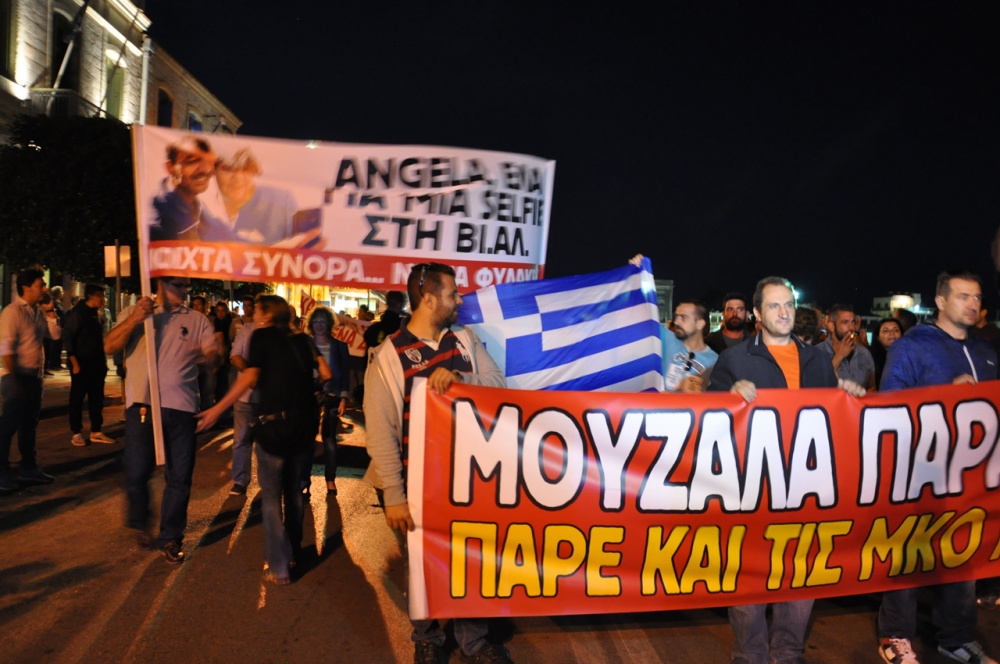 About 3,000 Chios residents rallied on Wednesday protesting the migrant situation on the island and the government’s announcement that two more migrant camps are to be built on the island.
According to Chios “Citizen” website, locals complain that the island has become a “warehouse of souls,” several ghettos have been formed, the living conditions of migrants and refugees are squalid and public safety and health are in danger.
“Our villages have turned into ghettos of delinquency, with local people fearing for their safety. Residents have been threatened with knives when they try to protect their property, burglaries are a daily event, livestock thefts, farm equipment thefts, trampling and plundering of fields, frequent fires around the VI.AL (migrant camp), Halkioi have turned into a vast wasteland. Migrants get drunk and terrorize drivers, they throw rocks at passing vehicles,” said a representative of the Kampochora Struggle Commission in her rally speech, according to Politis.
“People who are in the Souda camp live in squalid conditions, with all the implications for public safety and health. Residents are facing major problems, from property destruction and environmental degradation, to lack of privacy, the constant worry for our health and the complete loss of the sense of security,” said the representative of the Kastro Struggle Committee.
“Chios bore the brunt of the refugee crisis along with Lesvos. Immediately after the election of SYRIZA in power, we went from 185 persons (arriving) per month up to 2,500 a day,” said M. Sideratos of the Panchiaki Struggle Committee. “It is not acceptable that foreign powers impose on us what to do in our homeland. Today they tell that they will create two more hotspots. Today we tell them no new structure on the island. If they don’t tear down the favelas in the city, the Mersinidio center and the independent state of VI.AL., the situation will not ameliorate. We urge local authorities to side with the just demands of the community. The island is turning into a warehouse of human souls, into a gray zone. What else does the presence of Europol, Frontex and NATO mean?” he continued.