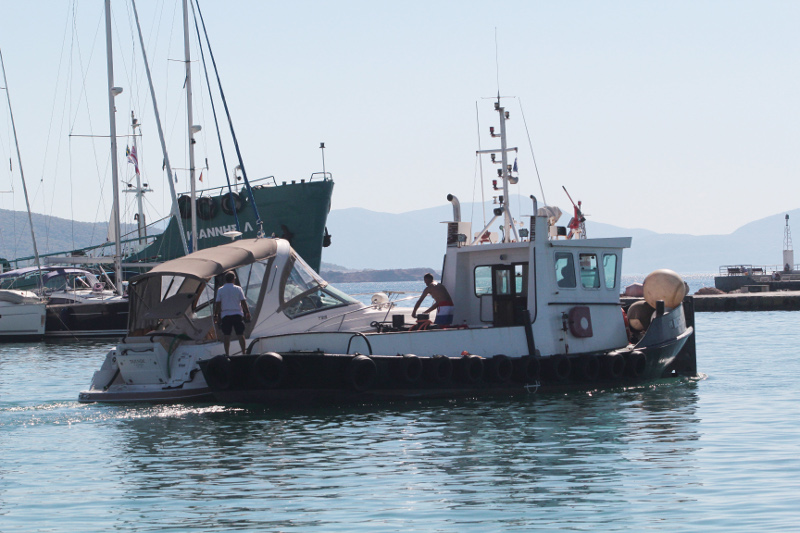 Thrasyvoulos Lykourenzos, the 77-year-old captain of the speedboat that rammed a tourist boat causing the death of four people and leaving two seriously injured, was arrested late in the afternoon on Tuesday. He was taken to the Aegina Coast Guard in a bed on account of reportedly facing debilitating health problems. He received an extension to meet with the Piraeus Public Port Prosecutor on Friday after an initial time had been scheduled on Wednesday.
He appeared in Piraeus in a state of shock as relatives of the deceased, including the five-year-old dead girl’s aunt held photos of her brother and niece that died in the accident.
So far, the captain has claimed that he was not speeding as eyewitness accounts have stated. He says that he was unable to avoid the collision. A close friend of the captain spoke to Proto Thema newspaper and states that Lykourenzos had been released from a private clinic in Athens last Wednesday where he had been treated for multiple thrombosis in his lower limbs. The condition is known to affect brain activity and can cause lapses in consciousness. Friends had warned him to stop using the boat due to his health but he had stubbornly refused to heed their warnings despite having fallen off his motorbike several times and having sustained injuries from these accidents.
Despite health problems, the accused captain manned the speedboat, named ‘Duente’, that hit a tourist barge transferring people from Perdika cape of Aegina island to Moni island at 1:00 pm. Four people were killed in the collision, including a five-year-old girl, two are seriously injured and 11 are hospitalized from the total of 16 that were injured when the speedboat crashed on the vessel carrying 25 tourists off the coast of Aegina.
The captain of the speedboat, who is also the owner, was arrested by Aegina port authority officials at a relative’s house late in the afternoon. The captain had fled the scene after slamming on the other vessel at high speed and cutting it in half before overturning it. The other three passengers of the speedboat – one man and two women – stayed and were detained by port authority.
The 58-year-old captain of the tourist boat is among the four dead. A total of 24 people, including the captain, were aboard the barge. A five-year-old girl, her 44-year-old father, and a 45-year-old man are among the four fatalities. A 29-year-old woman and a 16-year-old boy were transferred to a Piraeus hospital, suffering serious injuries in the legs and throat respectively.
Shipping Minister Theodoros Dritsas went to Aegina to be briefed on the accident and speak to port authority. He stated that authorities will shed light to the circumstances of the accident and justice will be served.