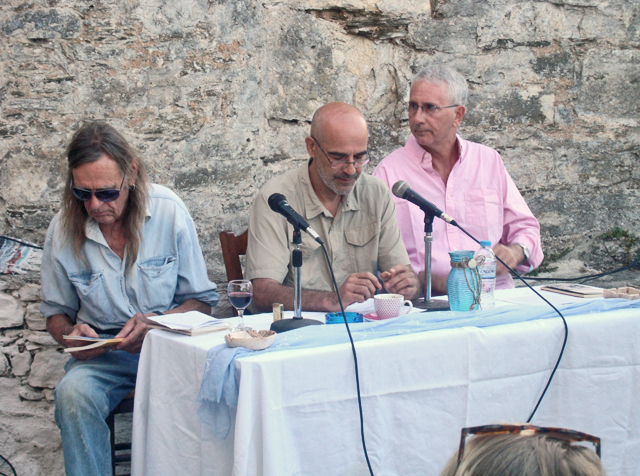 Two translators of Irish origin and a Greek publisher presented a series of translations of modern Greek literature on the beautiful Alonnisos island.
The Aiora publishing house is a labor of love for Aris Laskaratos, former interpreter in the European Union. Along with David Connolly, writer and translator, and Simon Darragh, also writer and translator, presented the series “Modern Greek Classics”. The series numbers 19 masterpieces of modern Greek literature (poetry and prose) translated in English, German, Italian, French and Russian.
Great Greek poets such as Odysseas Elytis, Konstantinos Kavafis and Nikiforos Vrettakos and writers such as Alexandros Papadiamantis, Georgios Viziinos, Georgios Seferis or Pavlos Kalligas can now be read all across the world. More books by renowned Greek classics of the 19th and 20th centuries will follow. Also, the books will soon be translated in Dutch and Spanish.
“Internationally, Greece is famous for Homer, the tragics and the philosophers, but not for its contemporary and modern literary works,” the two translators agreed. According to Aiora, the translations have not found the support they expected from museums and other places of interest for tourists.
The presentation took place at “House of Books”, the only bookstore/coffee shop on the island. Alonnisos was chosen for its unique beauty, as a typical island of the Sporades which combines the Aegean blue and the green of the mainland. Hundreds of foreigners have bought summer homes there, while some live on the island all year long. And Darragh is one of them, spending most of his time on the island.