GRNews
GreekReporter.comentertainmentCelebritiesLeonardo Di Caprio Tears it up at Greek Singer's Show on Mykonos... 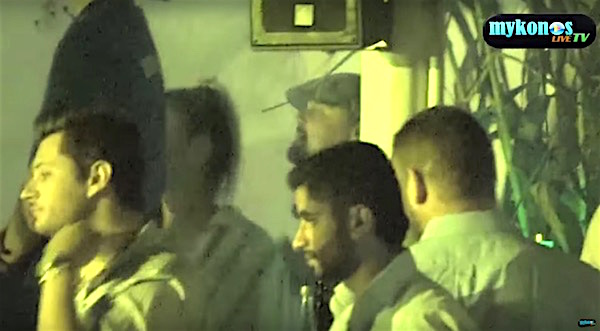 The Antonis Remos concert at Psarrou beach was the event of the year for the rich and famous on Mykonos, and Leonardo Di Caprio and his partner Nina Agdal danced the night away.
The concert was one of the most advertised events of the summer and the minimum admission price at 5,000 euros for a table of ten caused a stir in crisis-stricken Greece.
But Mykonos is another story, or another world, one might say. For most of the attendants, the Nammos restaurant admission price including a meal with champagne was less than the cost of a haircut, or a restaurant tip.
The Gipsy Kings opened the show with 80s hits “Bamboleo,” “Volare” and “Djobi Djoba.” Di Caprio and Agdal danced their hearts off amid the paparazzi flashes.
But more flashes were to follow when Remos took the stage under an impressive cascade of fireworks. It was most fitting for the much-advertised event, which has become a summer tradition on Mykonos, attracting the wealthy.
The most popular Greek singer sang all his great hits turning the restaurant into a huge dance floor. Many well-known Greeks were among the audience as the annual Remos show at Nammos is a “see-and-be-seen” event for those wanting publicity. Along with them, dozens of American, Turkish, Lebanese, and other businessmen and bon viveurs had fun like Greeks. And Remos never stopped praising Mykonos and Greece between songs.
Di Caprio and Agdal though stayed way in the back, enjoying themselves away from the cameras. The famous couple expressed their appreciation for the singer’s songs by dancing and swaying non-stop.