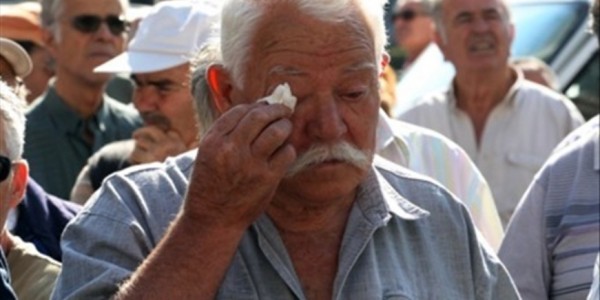 The summer of 2016 turns out to be another summer of discontent for Greek pensioners and wage earners who see their incomes slashed, as a new round of austerity begins after the imposition of the new bailout program measures.
It was exactly the same time last year (June 28) when Greeks found that the banks were closed and capital controls were imposed, continuing through today. This year, the end of June found wage earners and pensioners fuming or despairing in front of the ATM when they saw that their bank balances where lower than anticipated. And for hundreds of thousands of pensioners, the amounts were significantly less, even 48 percent lower in some cases.
These were the first salaries and pensions received after the implementation of the cuts applied so that the 2016 budget is adjusted and overall fiscal targets are reached. Despite the government’s reassurance, pensions were slashed for almost all pensioners, while public and private sector employees saw their wages decreasing after the tax brackets changed and solidarity contributions increased.
Again, in the case of wages, even though income tax did not increase for many, the so-called solidarity contribution was higher, thus eating into the actual income of salaried employees.
Regarding pensioners, about 150,000 of them who were receiving a supplementary pension for low pensions (EKAS), no longer qualify. Thousands more saw their EKAS shrinking.
Also, 284,000 public sector pensioners who were receiving a dividend from a special security fund for civil servants saw their dividend being 11 to 63 percent lower.
Also, according to an Ethnos newspaper report, 201,000 supplementary pension recipients will see their income shrink significantly in August. Along with them, 10,000 bank retirees and 6,000 public sector employees who receive high combined pensions will no longer enjoy the privilege.
Finally, 260,000 pensioners whose combined pensions amount to 1,300 euros before taxes will see significant cuts, ranging from 5 to 40 percent, depending on the amount of the main pension.
Regarding wage earners, public and private sector employees with wages of 679 euros per month and over will see their income shrink slightly if their wages are low to medium, ranging from 2 to 88 euros per month. This is due to increases in solidarity contributions. Also, people who earn over 41,000 per year will see significant increases in income tax.