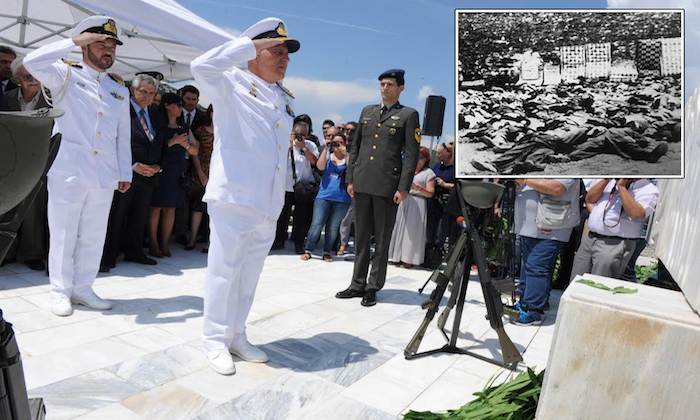 The best way to honour the victims of the Nazi atrocities in the village of Distomo is to preserve the historical memory and stop neo-Nazism from spreading, Greek Alternate Defence Minister Dimitris Vitsas said on Friday, in a message to mark the 72nd anniversary of the execution of 218 villagers at the hands of German troops in 1944.
Αn annual ceremony to remember the victims was held in the village and was attended by Parliament President Nikos Voutsis.
“The best honour for the victims of the Nazi atrocities is the preservation of the historical memory and at the same time, the continuous fight against [neo-] Nazism and the phenomena that reproduce it,” the minister said. He also reiterated that the Army History Directorate is currently in the process of assessing Occupation records which substantiate in a conclusive manner that “what happened was not just a war crime but a crime against humanity.”
Admiral Evangelos Apostolakis, Chief of the Hellenic National Defense General Staff, was in attendance for the events in Distomo. It was the first time the leaders of the country’s armed forces had attended the commemoration of the massacre in Distomo.
(source: ana-mpa)