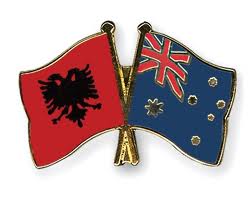 Greek Foreign Minister Nikos Kotzias, on an official visit to Tirana on Monday and Tuesday, received an angry reception outside the Albanian Foreign Ministry where a group of angry Albanians, known as Chams, tried to block his entry into the building. The 200-strong group did not manage to prevent Kotzias’ meeting with his Albanian counterpart Ditmir Bushati from taking place.
The action was organized by the Albanian Party for Justice and Integration, a coalition partner in the socialist-led Albanian government. The party promotes Cham rights in Greece and wants to reclaim property in the Epirus region.
The protestors shouted anti-Greek slogans and made provocative land claims. At the joint press conference between Kotzias and Bushati, one of the first questions asked by Albanian reporters was focused on the Cham issue and territorial claims in Greece.

The protest came after Greece’s Foreign Ministry issued an announcement on Sunday that criticized references made by Albania Prime Minister Edi Rama and Bushati regarding Chams, an issue that the Greek government considers to be closed. The Greek announcement said that “Albania needs to realize that its European course depends on the faithful implementation of the European Union’s five principles, among which is respect for justice and rule of law. This presupposes that it will respect court rulings, especially when they concern war crimes, and, instead of raising non-existent issues, implement the prerequisites and its commitments with regard to protection of the rights of the indigenous Greek National Minority.” It urged Albania to have respect for “accurate facts of history.”