How Greeks Came to Immigrate to Australia 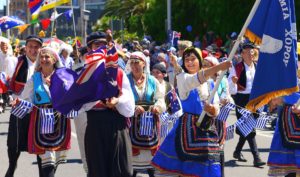 The first known Greeks to arrive in Australia in 1829 were a group of seven sailors who were transported to New South Wales to serve a sentence for piracy that was given to them by a British naval court. The sailors were eventually pardoned, but two decided to stay and settle. Although they could have never known, they would soon be joined by many sailors from their home country.

As with most Greek settlements that came about during the mid 1800s, the first Greek communities in Victoria were established. Many Greek sailors abandoned their ships in Australian waters when they heard the gold had been struck, with plans to eventually return to Greece.

The gold rush of the 1850s created some unique circumstances for the Greek sailors turned miners. Because of their plans to return to Greece, few women came to join them in Australia, leading to a disproportionate balance between genders. In 1871, just a few decades after the surge of Greeks there was only 19 women living in Victoria who were born in Greece, in contrast to the 127 men.

Many Greeks did not return home as originally planned and found other work in the food industry and as merchants once the gold rush subsided. By the turn of the century a remarkable community of Greeks in Australia began to take form as citizens from Greece, mostly relatives of the Greeks already established in Australia as well as townspeople came to join the settlers. The community flourished as the Greek Orthodox Community of Melbourne and Victoria was founded in 1897 and in 1901, respectively, following the creation of the Greek Orthodox Church in Melbourne. Shortly after which Australis, the first Greek language weekly newspaper went into print in 1913.

History played a vital role in an eventual surge of immigrants from Greece during the mid 1900s. At the beginning of World War I Greece remained neutral, until it eventually joined the side of the Allies. In response to this gesture, in 1916 the Australian government placed a special prohibition on the entry of Greeks to Australia, which remained active until 1920.

Following World War II as well as the civil war in Greece, it is estimated that more than 160,000 Greeks came to Australia, mainly to Victoria. After time, the immigrants were able to obtain better jobs and more family members joined them from Greece. The Greek-Australian community became one of the largest in population outside of Greece and remains so until this day with government statistics estimating over 600,000 people of Greek heritage living throughout the country.