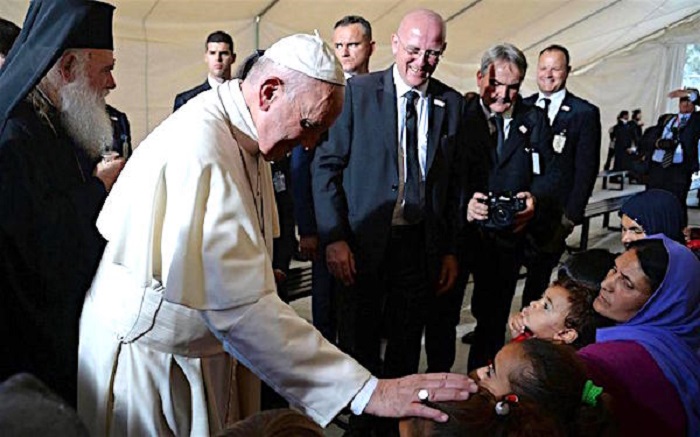 Speaking about his visit to the island of Lesvos, Greece, in St. Peter’s Square on Sunday, Pope Francis said his visit with Ecumenical Patriarch Bartholomew and Archbishop Ieronymos of Athens and of All Greece, aimed “to signify the unity in charity of all the disciples of the Lord.”
He thanked all those “who accompanied” the trip with their prayers, noting that the visit had brought the “solidarity of the Church” to the refugees and the Greek people. The Pope said that with Patriarch Bartholomew and Archbishop Ieronymos, they were able to meet individually with more than 300 refugees from Afghanistan, Syria, North Africa and other parts of the world.
“So many of them were children!” the Pope said, noting how some of the children had witnessed the deaths of parents or companions. “I saw so much sorrow!” he continued, and recounted the case of a young Muslim man, with two young children, whose Christian fiancée was killed by terrorists, who cut her throat, because she would not deny Christ and renounce her faith. “She is a martyr!” the Pope said, noting that the young man had sobbed profusely.
(source: ana-mpa)