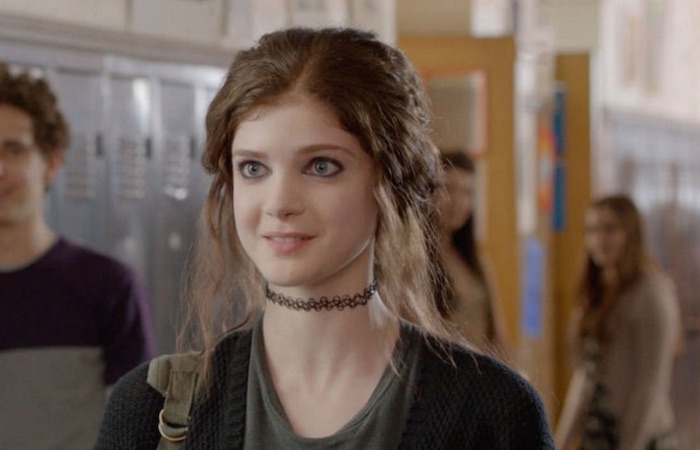 “My Big Fat Greek Wedding 2” recently opened in theaters, and though audiences recognized most cast members from the original family, you probably noticed one bright young newcomer playing Paris, Ian and Toula’s daughter. Elena Kampouris, the actress who scored this breakout role in the much beloved “My Big Fat Greek Wedding” series, spoke to us about her experience doing the movie, her acting career, and her strong Greek pride!

What was your experience like filming “My Big Fat Greek Wedding 2” and working with the cast?

For me, the first movie is so iconic, especially for the Greek people, and I grew up watching this movie hundreds of times since I was 4 or 5. So I was very familiar with the movie and it had a super special place in my heart; when the audition came out of nowhere, it freaked me out!

I was super nervous going into it, because you can see from the first movie how the cast all knows each other and has a great chemistry. I was the only new member of the cast in the Portokalos family, so I was a little intimidated, but first day on set I was just taken in with big open arms and felt the love immediately – which is what I think this movie is, watching it, you feel the love immediately. I was very proud to call myself a Portokalos – an orange!

It was just such a weird thing when it happened, because when I first got the audition I wasn’t sure if I should go in for it. The thing is, I don’t look like a typical Greek girl because I have light eyes, fair skin, and blonde hair, so no one will believe me when I tell them I’m Greek. Nevertheless, when I was growing up my father would always tell me how perfect I would be to play in a sequel to “My Big Fat Greek Wedding” – which is so eerie to think about now. So auditioning was very nerve-wracking because if I didn’t get the role it would feel like not only a rejection from the movie, but for my Greek family as well, and I thought there was no way I could get the role. They were auditioning hundreds of girls, looking for Mediterranean/Hispanic looking girls and I don’t look like a Greek girl, so I thought there was almost no chance, but I did end up putting a tape together. Somehow, Nia Vardalos looked past the surface and believed in me and gave me this incredible opportunity.

How did you find out you were cast?

They had flown us into Toronto for the day to read for Nia, and she told us right there in the room that we got the parts – I started freaking out and crying because it was an absolute dream come true.

Before that, we had been reading and auditioning with fake sides Nia had written because she didn’t want to give anything away about the sequel. We got the full script in paper form the day before flying in, so it was only at that last audition that we actually found out the real parts we were even auditioning for.

Then we were driven straight to our character fittings to have our costuming done, they flew us back home and we were told “get ready to shoot in a week and be back in Toronto”. It just happened so quickly, so unorthodox – Greek style!

Since when have you been acting?

I’ve only been acting for four years now, so it’s still very new for me. I feel so grateful to be part of this movie, it’s absolutely insane and I’m still processing everything – especially because I’m this girl plucked out of nowhere. I’m not part of the industry, I don’t have family in the business – my dad is Greek, my mom is French, and I grew up in New Jersey – so to be in this huge movie that rings so true to my heart and my heritage is amazing.

Talk to us a little about your Greek heritage. Do you know where you father’s side of the family is from?

My dad’s family is from Kassos and we usually go there every summer we go to Greece. Actually, there’s a cool story about that side of the family – my great-grandfather is responsible for finding the freshwater supply for the island. In 1951 there were only 8 people living on the island because there was not enough fresh water, and now there is a population of 1,100 people thanks in part to my great pappou. The government would not fund his expedition, but he teamed up with this French hydraulic engineer and spent years trying to find the water through mining. Sadly, he went broke funding the search and died penniless at the age of 94, but when he was 93 they found the water, so he at least died having found it though he died a poor man. There is actually a statue of him commemorating his loyalty to his homeland and the fact that he never gave up. My grandmother’s side of the family is from Kefalonia and my grandmother Myrto was named after Myrtos Beach.

Have you been to a real Greek wedding?

I’ve been to one Greek wedding in my life on the island of Kefalonia and it was beautiful! The bride came in on a donkey, we threw rice, we were in the Greek church and it was sweaty and hot and tiny, but it was a really beautiful experience – especially the long service and the exchanging of the halos.

Can you talk to us about any upcoming acting plans?

I just did “Before I Fall” in Vancouver right after “My Big Fat Greek Wedding 2”. It’s based on the popular New York times bestseller novel of the same name written by Lauren Oliver, and it’s directed by Ry Russo-Young. I loved working with her and the mainly female cast, also because I just think we need more of a female’s touch in Hollywood. That’s also why I loved working with Nia – she not only starred in “My Big Fat Greek Wedding 2” but she also wrote and produced it.

It was great working on “Before I Fall” because the role is completely opposite to the role of Paris. It’s a tragedy so the role is kind of dark, and it was interesting going in a completely different direction like that.

I play a really disturbed young girl named Juliet who is suicidal, and she’s been brought to the brink of insanity because of the intense bullying she goes through at school – so it’s a really deep part I got to sink my teeth into and I love doing that.

I’m also supposed to be in Arkansas sometime during this summer to shoot something called “Pretty Near Perfect”, which is this indie coming of age movie. It’s about the life of the writer/director, Jennifer Gerber, being a teen pageant hopeful in the South and trying to succeed in that world. She was also struggling with a mother with a debilitating illness and listening to this mentor, a pageant coach, to help her succeed, but he’s also a little bit abusive – so it’s taking a look at that pageant environment and how it can affect girls psychologically and physically.

Do you have any plans to go back to Greece soon?

I’m actually planning to go to Greece in August. When I go to Greece, I feel like my soul is at home. It’s hard to describe, but right when you get there it’s a very unique feeling that comes over you.

We are based in Vouliagmeni at Astir Palace, but we also go to different islands because we have family all over. All the islands are absolutely gorgeous, but Paros is one of our faves – that’s where my father and my mom honeymooned.

What would be your ideal role or dream director?

I love Australian culture (I think it’s pretty much the Greece 2.0) so I would love to work on my Australian accent and get a role using it – that would be a dream come true. Also, I have a bulldog named Petunia, so if I could play a role where I was surrounded by bulldogs, that would be awesome – I love them.

But seriously, director wise I’d say, I love Quentin Tarantino and Guy Ritchie. I absolutely love Snatch and RocknRolla. To me, it’s Brad Pitt’s most underrated performance – also, I found out apparently Guy Ritchie got a lot of flack from critics saying “the characters’ accents are so strong we don’t know what they’re saying”, so he encouraged everyone to have even stronger accents as kind of like an “in your face” statement to the critics. My dad actually introduced me to those movies, like he introduced me to “My Big Fat Greek Wedding”, because he was born in Athens but he went to an English boarding school so he very much loves the London gangster type movies, and I picked up on that.

That’s why Guy Ritchie would be my number one, it would a dream to work with him. It’s funny because so many people worked with him before they became the huge stars they are now, like Tom Hardy, Jason Statham, and Gerard Butler.

Any Greek entertainers you love?

Marina & the Diamonds (real name Marina Diamandis) is my absolute favorite artist! She writes all of her own stuff, no auto tune. I would love to meet her one day!

Last comments on “My Big Fat Greek Wedding 2” and your life since the release:

I think my  “My Big Fat Greek Wedding 2” rang so true to people, because for both Greeks and a lot of non-Greeks you can relate to what’s going on, and have probably been through it at some point in your life. It’s kind of a universal thing with all nationalities, because we’re all the same, and we’ve all got those slightly crazy family members – I just think us Greeks are a little bit louder about it!

Also, I went to the Greek Independence Day Parade and I had my own float! It was a Greek wedding themed float with my name on it and they let me bring my family. I started float-hopping too. All the Greeks had seen it and were freaking out, and they were kind of kidnapping me and taking me on their floats – the love I felt that day was amazing, the Greek pride was off the chain! That was my first ever parade, and to have my own float was absolutely insane.