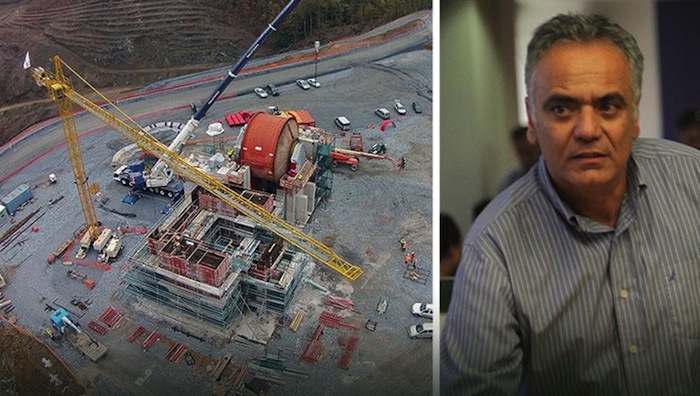 Greek Environment and Energy Minister Panos Skourletis spoke today of a “necessary compromise” that needs to be reached between government and Eldorado Gold Corporation and underscored the point that his own ministry can contribute towards this goal.
The Canadian gold and mining corporation has been facing problems with Greek authorities and environmental groups since it laid foot in the Halkidiki peninsula (the birthplace of Aristotle in northern Greece) in 2011. That was when the Vancouver-based company took over the local mining industry and unveiled plans for a 1 billion euro investment that would turn financially strapped Greece into a major gold- producing country.
Opposition to the presence of Eldorado Gold into Greece’s most natural region began in 2013, and the corporation actually threatened to pull out from the country just a couple of months ago as Greek government officials have been reluctant to provide all the necessary permits for the continuation of mining operations in Skouries.
Nonetheless, all indications are that Eldorado will continue its mining operations in northern Greece as the country is in dire need of foreign investments and there is concern among government officials that the suspension of Eldorado’s operations may be interpreted by the international business community as a sign that Greece is an unfriendly country to foreign direct investments.
This is how one should interpret the comments made today by Greek Environment and Energy Minister Panos Skourletis in the context of an interview when he said that “the stance of the government and of the ministry has been steadfast from day one and aims towards securing the legality of the public interest and the protection of the environment. Such a huge investment must secure, beyond other things, social peace. But how can the investment in Skouries move forward when it is congruent with social divisions and polarization? The ministry can contribute towards this aim without putting water in its wine.”
Mr. Skourletis also addressed issues and concerns around energy, but it was naturally his comments on the future of Eldorado’s mining operations in Greece that were the highlight of the interview.
Eldorado’s investment ranks among the biggest projects undertaken in Greece in recent years, but it comes at a huge cost to the environment and the local economy.
(Source: capital.gr)