GRNews
GreekReporter.comGreeceFights Between Syrian and Afghan Refugees in Athens, 8 Injured

Fights Between Syrian and Afghan Refugees in Athens, 8 Injured 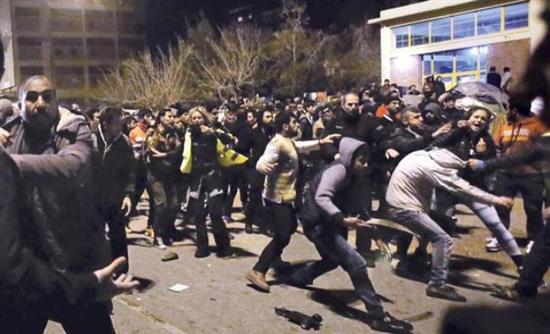 At least eight people were injured as a violent fight between Syrian and Afghan refugees broke out at Piraeus Port on Wednesday night, the Hellenic Coast Guard says.
More than 5,000 migrants and refugees are stranded at Greece’s biggest port waiting to be transferred to accommodation centers. The bad living conditions have created tension in the past few days.
On Wednesday, at around 10:30 pm, at the area of the gates E-1 and E-2 a massive fight broke out with dozens of people from each side beating on each other.
The two refugee camps also threw stones at each other and broke several windows of passenger terminal E-1.
According to information from the Athens News Agency, the fight started after an Afghan man harassed the wife of a Syrian man who later attacked the Afghan.
Riot police rushed to the scene to break the fight, along with the help of the coast guard. Police stayed in the area through the night to prevent any more fighting.
Two of the men who were taken to the hospital suffered serious head injuries, while a woman was hospitalized because she had a nervous breakdown.
According to figures given by the coordination committee for the refugee crisis, 5,800 refugees are currently at Piraeus Port. On Wednesday, the migration department distributed leaflets urging refugees and migrants to leave the area and move to temporary shelters.
However, the migrant accommodation centers at Eleonas and Kyllini are not ready yet, while some of the refugees refuse to leave the area in the hope that they will find illegal routes to cross to Europe.