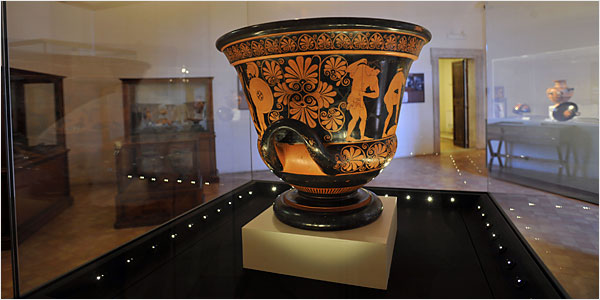 The New York Metropolitan Museum is to send an ancient terracotta krater (bowl for mixing wine with water) with a rare depiction of a sculptor at work to mark the 150 anniversary of the foundation of the National Archaeological Museum in Athens.

The column krater from the Greek colonies in the Apulian region of south Italy, dated to the late Classical era (360–350 B.C.) and attributed to the Group of Boston 00.348, will be put on display in the National Archaeological Museum from May 9 until September 30.

The Central Archaeological Council on Tuesday approved the temporary import of the krater, which is loaned in exchange for artifacts contributed by the National Archaeological Museum to the exhibition “Pergamon and the Hellenistic Kingdoms of the Ancient World” organized by the Metropolitan Museum between April 18 and July 10. The costs of transporting the krater to and from New York will be covered by the Metropolitan Museum.

The specific krater stands out for its depiction of a sculptor employing a now lost sculpting technique. Representations of artists at work are, according to the krater’s description at the Met, in any case rare. The specific vase, however, additionally “illustrates a craft for which virtually no evidence survives, that of applying pigment to stone sculpture using the technique of encaustic.”

“The column and phiale (libation bowl) at the far left indicate an interior space, probably a sanctuary. In the foreground stands a statue of Herakles with his club, bow, and lion-skin. The painter, characterized by his cap and his garment worn to leave his upper body bare, applies a mixture of pigment and wax with a spatula to Herakles’ lion-skin. To the left, an African boy tends the brazier on which rods are heating that will spread the tinted wax. Above, Zeus, ruler of the gods, and Nike, personification of victory, preside as Herakles himself ambles in from the right to survey his image. The reverse, in an outdoor setting, shows Herakles’ staunch protectress, Athena, seated in conversation with one of the Dioskouroi. To the left, Hermes, the messenger god, turns away from Pan, his son, while Eros plays with a bird below,” reads the description at the Met.

The krater can be linked to other exhibits at the National Archaeological Museum that still retain traces of their decorative pigmentation, such as sculptures or Fayyoum portraits, which also used the technique. It may also be linked with other representations of Herakles in sculpture and pottery, such as the Farnese Herakles recovered from the Anti-Kythera shipwreck.

All departments of the National Archaeological Museum will participate in displaying the krater, while the museum will also prepare a detailed pamphlet on the artifact.
(source: ana-mpa)