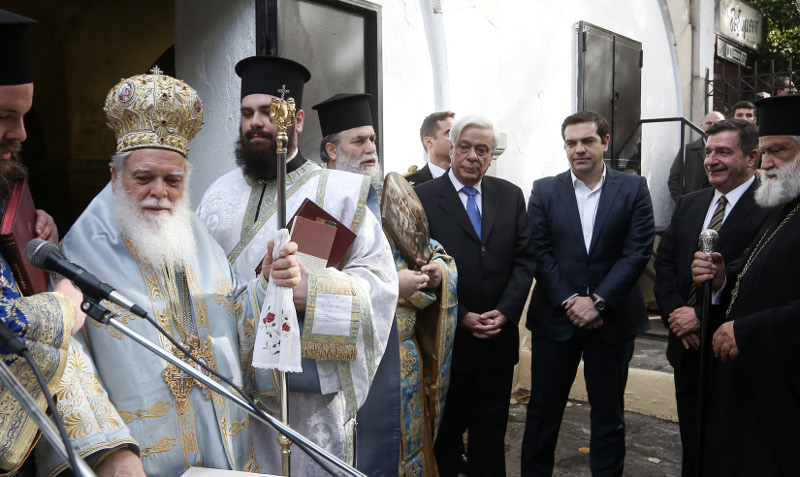 President of the Hellenic Republic Prokopis Pavlopoulos and Prime Minister Alexis Tsipras celebrated Epiphany with the traditional sanctification of the water at Dexameni in Athens.
Traditionally, the water sanctification and the dive for the holy cross ceremony takes place at Piraeus, Greece’s biggest port. This year, however, the prime minister chose not to go to Piraeus in protest against comments made by Piraeus Bishop Seraphim.
Centrists Union president Vassilis Leventis was the only party leader who attended the Piraeus ceremony. New Democracy interim president Yiannis Plakiotakis attended the Epiphany ceremony at Lasithi, Crete.
Seraphim had made negative comments against Tsipras after the Greek Parliament passed the bill that legalized civil partnerships for same-sex couples. The prime minister decided to abstain from the Piraeus ceremony. Furthermore, state broadcaster ERT did not cover the Piraeus ceremony.
Criticizing the absence of the state broadcaster and Tsipras’ decision to shun the Piraeus ceremony, Seraphim told Star television: “The government recalled the broadcasting by the state television, which for decades broadcasts the Piraeus Epiphany ceremony to all corners of the world. Unfortunately, we have a government, which was elected democratically taking advantage of the economic tragedy of the country, but suffers from a fascist mentality, hatred and vindictiveness.”
The Dexameni ceremony was attended by president of PASOK Fofi Genimmata, Tourism Minister Elena Kountoura, Education Minister Nikos Filis, New Democracy MPs Vassilis Kikilias and Theodoros Fortsakis, Potami MP Giorgos Mavrotas and Mayor of Athens Giorgos Kaminis among others.
President Pavlopoulos wished that, “the light of Christianity lights the darkness of poverty in Greece.”