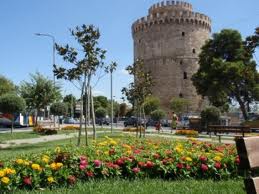 FOR X-MAS DAY
A 22-year old French man named Roman is travelling towards eastern Europe on foot. He started his journey from Lyon, his hometown and a few days ago he arrived in Thessaloniki Greece. He travels light, carrying a small backpack, his dream of changing the world and a small leather-bound notebook, where he writes about the people he meets.
The young man mostly travels on foot and occasionally hitchhikes, but he is constantly trying to find new people who will share with him their thoughts on how to achieve world peace.
“My notebook will be a collector’s book one day. I ask the people I meet on my way to answer one question: ‘How can we achieve world peace?’ My goal is to meet as many people from different nationalities and all social classes to create a symbol for peace. This means that these answers can work as a starting point for intercultural dialogue; all this could be a way for different cultures and people to work together,” the young man said.
Roman began his journey almost two months ago and in that time he has visited Germany (Karlsruhe, Stuttgart and Munich) Austria (Salzburg and Vienna), Hungary, Romania, Serbia, Bulgaria and now Greece. Apart from Thessaloniki he also traveled to Meteora and the island of Thasos.
According to the young man all the people he has met have welcomed him and agreed to contribute to his cause. He especially liked the people in Thessaloniki, therefore he decided to spend his Christmas vacation in the northern Greek city.

The Phenomenon of the Twin Lakes of Zerelia in Greece