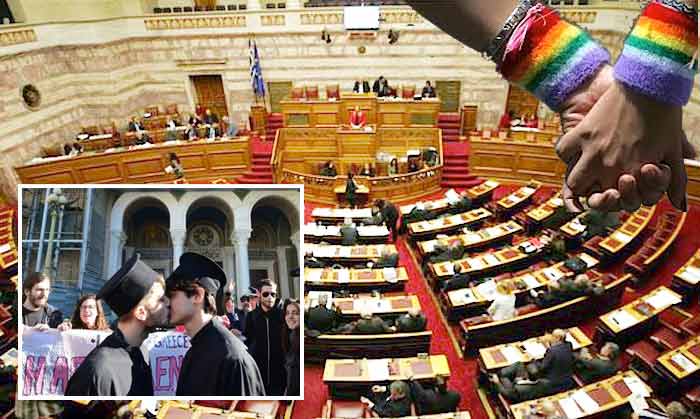 The Greek parliament legislated the cohabitation agreement for same-sex couples on Tuesday evening following a heated debate among MPs.
The parliamentary majority of 193 MPs in favor of the legislation was composed of an unusual configuration. SYRIZA, the Democratic Alliance, To Potami, the Union of Centrists voted in favor. New Democracy chose to allow its MPs to vote according to their own beliefs on the matter.
56 MPs voted against the cohabitation agreement. The coalition government’s junior partner, the Independent Greeks (ANEL), the Greek Communist Party (KKE) and Golden Dawn voted against the legislation.
Greek Prime Minister Alexis Tsipras addressed the parliament before the vote, and apologized for the fact that the agreement had not been voted on for so many years. The prime minister also claimed that Tuesday’s vote marks the end of a cycle of shame and backwardness for the Greek government as well as marginalization for certain people.
Tsipras further said the cohabitation agreement vote being deliberated on paves a new road for Greece, as some people [the gay community and their supporters] will feel they have hope for a brighter future in the country.
Greek Finance Minister Euclid Tsakalotos, who voted in favor of the legislation, wore a pin with the rainbow flag colors on his blazer.
A dispute broke out when “To Potami” MP Giorgos Amyras claimed that if a homosexual were in a sexual relationship with ANEL MP Constantinos Katsikis, he could be accused of bestiality. Amyras made the comment in response to Katsikis and ANEL leader Panos Kammenos’s connecting homosexuality with bestiality, according to the “To Potami” MP. Katsikis proceeded to call Amyras a political thug.
Earlier in the day, a few protestors demonstrated outside the Metropolitan Cathedral of Athens in response to some Greek Orthodox Clergy members’ comments on the cohabitation agreement and homosexuality in general. Two young men dressed in priest robes kissed in front of the Cathedral.
Supporters of the legislation also stood outside the Greek parliament during Tuesday’s discussion.