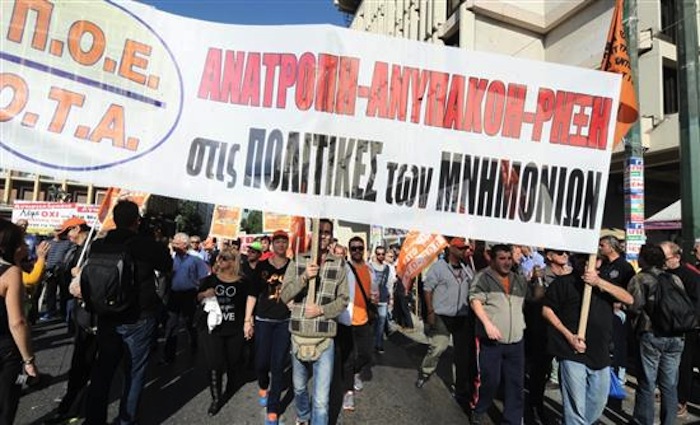 Greek workers and professionals are on a 24-hour general strike today, Thursday, protesting the harsh austerity reforms that are about to be voted on in parliament.
The General Confederation of Greek Workers (GSEE) and the Public Sector Employees Association (ADEDY) participated at a major protest rally that started at Klafthmonos Square at 11:00 am.
The two major unions are reacting against the impending harsh reforms in security funds that translate to severe pension cuts and increases in retirement age. This is the second general strike against the reforms, as the unions went on strike on November 12 as well.
The public transport system operates only from 9:00 am to 9:00 pm. Trains and suburban railways will not operate at all throughout the day, while passenger ships remain tied in ports for 24 hours.
Public hospitals take emergency cases only, while lawyers, courts, ministries, public offices, municipalities, schools and universities are closed.

The world after the coronavirus pandemic will look very different, according to a new book from Yale professor Nicholas Christakis.
Greece

The health of Greek convicted terrorist Dimitris Koufontinas has swiftly deteriorated lately, it was made public on Saturday evening.
Ancient Greece