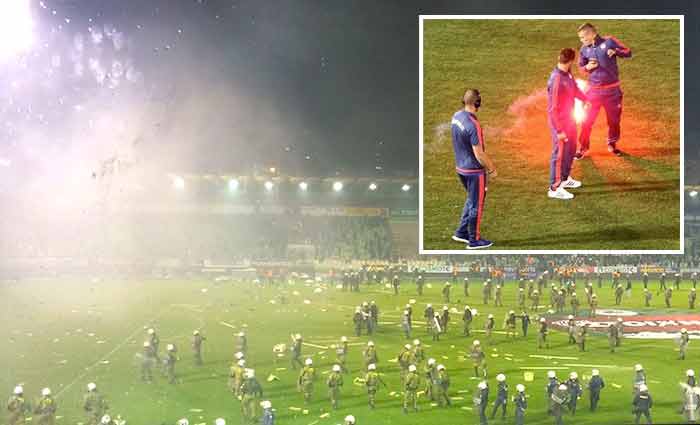 Panathinaikos F.C. is likely to lose 1.2 million euros due to the incidents that took place on the day of Greece’s biggest soccer derby.
The Greek Superleague’s disciplinary committee has punished Panathinaikos for the extensive clash that took place before the November 21 derby with Olympiacos F.C., which was ultimately postponed.
Prior to the game Panathinaikos fans clashed with police outside the team’s stadium. Inside the stadium, a flare thrown by a Panathinaikos fan hit Olympiacos player Alfred Finnbogason on the leg while he was walking on the pitch before the warm up. Two hours later, the derby was called off and a group of fans took to the pitch and fought with police.
On the football front Panathinaikos not only lost the to Olympiacos game 3-0 but was cut another three points. This makes the hopes for this year’s title very difficult as there is now an 11 point difference between the two teams.
The league’s disciplinary committee also ordered the Athenian team to pay a 190,000 euro fine for the incident. The fine may turn out to be the least of Panathinaikos’s concerns.
Sport24.gr reports that the damages caused at the Apostolos Nikolaidis stadium will cost another 100,000 euros. The report also notes that the team is set to lose approximately 200,000 euros from the four games without attendance via lost ticket revenue and merchandise sales.
The majority of the impeding financial woes come from contracts. Specifically, NOVA, the cable service that would televise the team, had a contract that if the derby does not happen due to Panathainikos’s fault, the team would have to pay the company 300,000 euros.
OPAP, a Greek sports betting company also agreed with Panathinaikos that if the derby was called off, due to Panathinaikos, the team would pay double the Superleague fine, which in this case amounts to 380,000 euros.
Panathinaikos’s board has essentially rejected these decisions and has made its intent to appeal known.
“The exterminating punishment that was imposed by the Supeleague’s primary disciplinary instrument, has made a painful impression on us. Obviously, PAE Panathinaikos will proceed with every prescribed means of appeal to overturn this legal decision and it strongly believes that it will be vindicated,” the team’s announcement notes.
The team also notes that it will work with the State to eradicate corruption and violence from Greek football, but does not intend to sacrifice itself.

Greek PM Mitsotakis vowed to strengthen the national health system during a meeting on the epidemiological situation in Attica and the rest of the country.
Charity