GRNews
GreekReporter.comGreek NewsArchaeology'Colossus of Rhodes Project' to Revive One of Ancient World's 7 Wonders 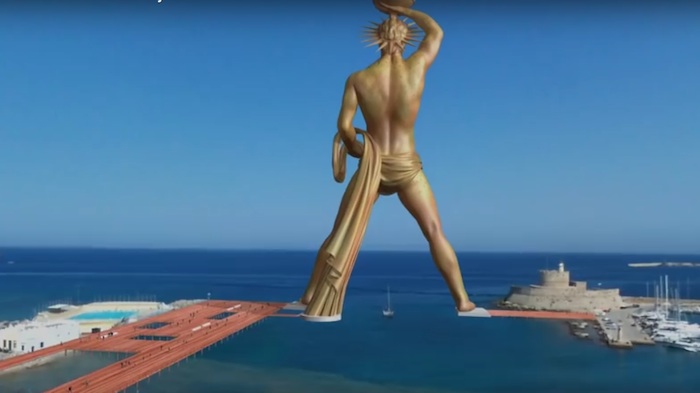 Young professionals from Greece, Spain, Italy and the United Kingdom have been inspired to take up the ambitious “Colossus of Rhodes Project,” aiming to revive one of the Seven Wonders of the Ancient World.
The Colossus of Rhodes was a statue of the Greek titan-god of the sun Helios, erected on the Greek island of Rhodes by Chares of Lindos, in 280 BC, to celebrate Rhodes’ victory over the ruler of Cyprus, Antigonus I Monophthalmus. It was one of the tallest statues of the ancient world standing over 30 meters (around 98 feet) high.
The bronze structure was destructed after Rhodes was hit by the 226 BC earthquake, however, it was not until 654 AD that Saracens ransacked the island and sold the statue’s relics.
Over 2200 years after its collapse, architect Ari A. Palla, archaeologist Christos Giannas and public relations-marketing professional Dionisis Mpotsas from Greece, civil engineer Enrique Fernández Menendez and economist Matilda Palla from Spain, architect Ombretta Iannone from Italy, as well as civil engineer Eral Dupi from the United Kingdom, recommended its restoration, as part of a European initiative the financing of which is addressed to the general public.
“Antoni Gaudi managed to collect fundings from citizens making them feel part of the project Sagrada Familia. We would like to share the same idea but, thanks to technology, people all around the world could be involved. Thus, the Colossus of Rhodes will become a “global” monument,” the ambitious creators refer on their project’s official site.
Their primary objective, according to their statement, is to “put back on the map the island of Rhodes beginning with the restoration of its historical value,” while they also wish “to bring out to light the hundreds of archaeological findings forgotten in the storerooms of the island.”

For the aforementioned reasons, the young professionals are planning to create a gigantic 150 meter-high museum-structure, that will house thousands of archaeological findings that have long been abandoned beneath layers of dust in several storage areas in Rhodes, simultaneously arousing the same emotions that visitors who arrived on the island more than 2200 years ago felt.
The colossal statue will also host a cultural center and a library, while at the same time will regain its ancient function as a point reference for boats (lighthouse). Its size will be larger than the original structure, while its “skin” will be covered by solar panels, making it energy autonomous.