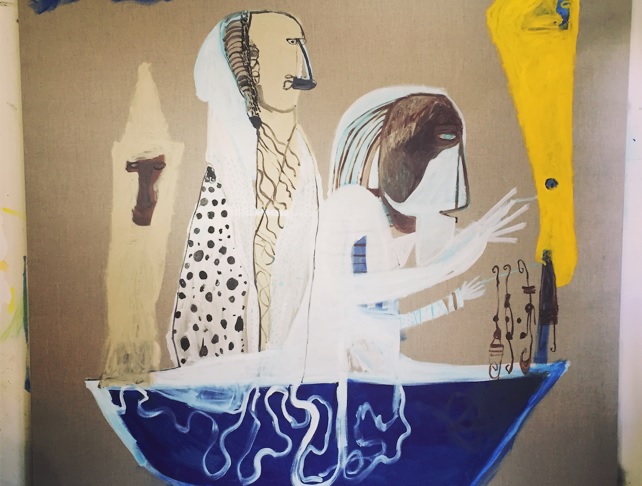 Artereal Gallery will present a solo exhibition by the Sydney based Greek artist, George Raftopoulos, opening Wednesday October 7 and continuing until Thursday November 12, 2015.

Entitled Mythic Nation, the narrative-driven body of work comprises paintings and works on paper and continues the artist’s preoccupation with Greek mythology, identity and growing up Greek in Australia.

While best known for his vibrant, large-scale paintings of mythological figures doused in generous lashings of irony, in Mythic Nation, the artist continues to examine themes integral to his practice but narrows his focus to consider the experience of the migrant, through both a historical and contemporary lens.

“Migration has been an ongoing concern from me since I was young, and in light of my own Greek heritage, I have always been interested in what happens to our identity when we are in between two places. To what extent is our own identity built on language, our appearance or where we live? These are the questions I address in my work.”

Following in the tradition of Aesop’s fables, Raftopoulos is driven by a desire to tell his own stories that, despite their deeply personal roots, speak of universal truths around cultural identity, migration and belonging. His chalky, frescostyle paintings document the migrant’s experience and the historical representations of “boat people,” a term that’s become entrenched in stigma. As part of this, the artist reflects on man’s inhumanity to man, expressed via Greek Mythological references but filtered through modern-day experience, politics and philosophies.

“My paintings are loaded with allegorical Greek mythological references but in the same token they have a sense of irony because I poke a lot of fun at the establishment. As much as I can, through my work I try to battle common but unfair stereotyping of people who might look different or have a unique surname,” said Raftopoulos.

Archaic yet contemporary, his works convey stories of migration throughout history and within Greek mythology, set against more troubling contemporary iterations. For example, his work Raft of the MEDUSA directly references the Gericault painting of the same name but is in direct response to one of many grim stories of ill-fated boat people crossing the Mediterranean to reach Greece, as seen in the news over recent weeks. Through this, the artist sends a poignant reminder that human migration is a historical phenomenon since time immemorial, and that one person’s beacon of hope can be another’s idea of hell.

Mythic Nation continues at Artereal Gallery from 7 October until 12 November 2015.