Tourist in Santorini Killed by Donkey 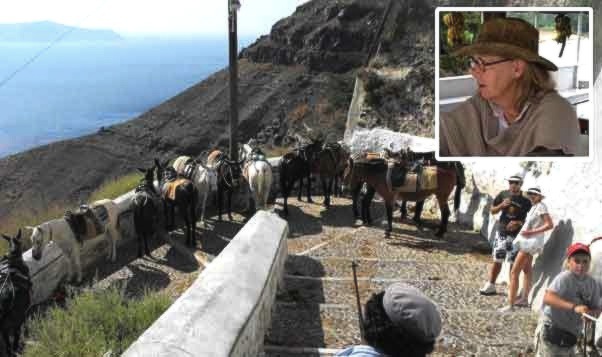 The Greek island of Santorini has been shocked by a tragedy that occurred in Fira, when a donkey accidentally caused the death of 67-year-old German tourist who was enjoying a cruise in the Aegean.
The unbelievable accident occurred on Wednesday, October 7, after the cruise ship anchored at the old port of Fira. The German tourist and her husband disembarked along with two friends and went on a walk around the town center, only a few hours before the ship was set to leave for Mykonos.
The two couples were enjoying their walk, when suddenly a donkey, used by tourists to navigate around the island, freed itself from its owner and ran away. At first, the animal hit the 67-year-old woman and then trampled her while its owner was frantically running behind it trying to subdue the animal.
The husband of the 67-year-old tourist is in disbelief of what has happened. One day earlier he had been celebrating his wife’s birthday, and now he is left alone.
In a state of shock, he gave his statement to the police and was helped back to the cruise ship, still holding his wife’s personal items, her watch, her jewelry.
The donkey’s owner is currently being held at the local police station, where he will give his official statement as part of the preliminary investigation.