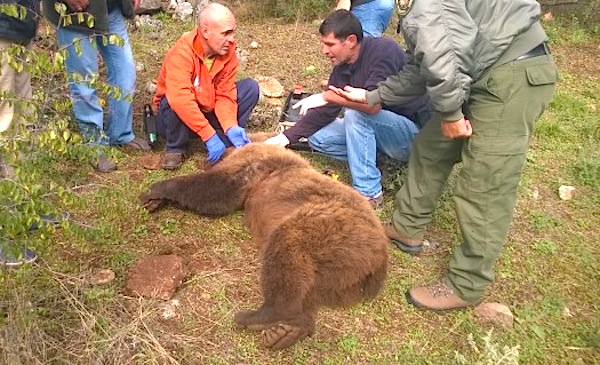 A five-year-old female bear, possibly pregnant, has been rescued after becoming trapped in an illegal wire snare and almost suffocating to death, the environmental bear conservation group ‘Callisto’ reported on Monday. The group was called in to the Siatista, Kozani, Greece,  area to assist with the incident by the Tsotyli Forestry Service last Friday.
Callisto mounted a rescue operation to release the bear, through a team maintained in the framework of the European LIFE ARCPIN program in the Grevena area. In addition to forestry staff, teams were also sent by the Macedonia-Thrace Hunting Federation Rangers and the Kozani Veterinary Service.
The trapped bear was administered an anaesthetic by a veterinarian working with Callisto and released with the assistance of personnel from the other agencies without suffering serious injury. It was also fitted with a radio collar that allows her movements to be tracked for research and management purposes.
She has recovered from the anaesthetic and is currently moving through forests far from human settlements, the group reported.
According to ‘Callisto’ the wire snare in which the bear became trapped is normally used by poachers hunting wild boar. It has been declared illegal due to its brutality for trapped animals and also because it also poses a threat to non-target protected species, such as bears.
A similar incident had also been reported last April in Kozani.
(source: ana-mpa)

The Great Schism that Split Christianity into East and West