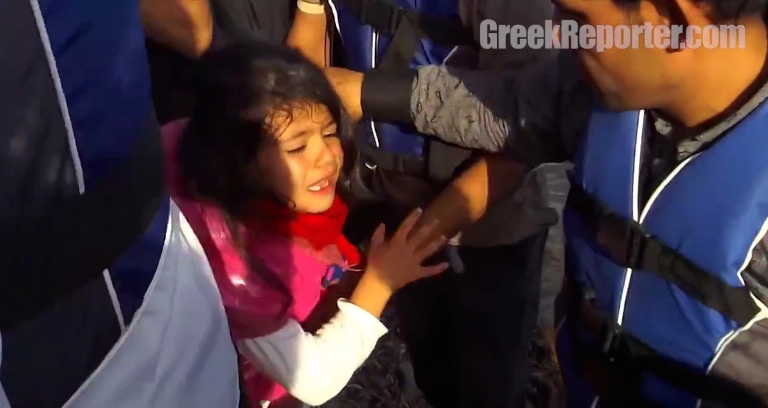 Watch how Syrian and Afghan refugees enter Greece and what they have to go through after their arrival on Lesvos Island in order to reach a safe haven in Europe.
Thousands of refugees continue to arrive daily on Lesbos Island, while Greek authorities are trying to coordinate the processing and evacuation of the unprecedented numbers stranded on the Greek island.
The EU has promised help, but is yet to be seen on the ground. Eric Kempson, a local resident of Eftalou on the northern part of Lesvos, has been filming the dozens of overcrowded boats that arrive daily on the island, often carrying small children and infants.
“I film the videos hoping that people will see them and finally help Greece to deal with this bloody tragedy,” says Kempson who is originally from the UK, but has been living on the Greek island of Lesvos for the past fifteen years.
Hundreds of thousands of Syrians and Afghans, escaping their war-torn countries, are coming to Greece in search of peace and a better future. Greece – already in an economic crisis – is the easiest point of entry to the EU for those coming from the East. They arrive with one goal, to continue their long journey to Northern European countries such as Germany and the U.K.
“People overwhelmingly just want to move on,” says Emily David, the International Rescue Committee emergency protection coordinator. “They want to continue their journey at whatever the cost. They’re determined to reach their friends, family and find safety in Europe. We’re here to make sure that journey is as safe and dignified as possible.”
More than 200,000 refugee’s entered Greece only in 2015 and it is estimated that another two million people are waiting in Turkey to find a way to reach Europe, most likely through Greece.