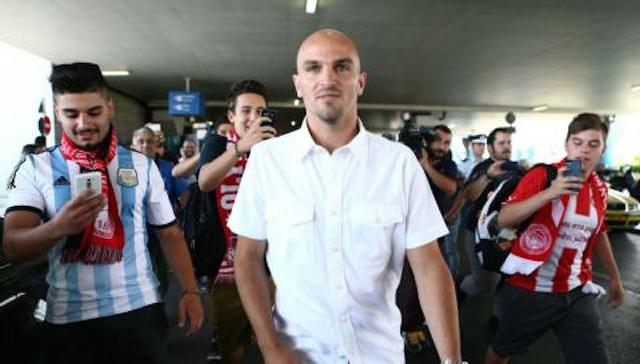 The Greek Super League just got another major international player added to its ranks.
International football player Esteban Cambiasso signed a contract with Greek champions Olympiacos F.C. on Friday evening.
Upon his arrival to Eleftherios Venizelos airport in Athens, Cambiasso was greeted by cheerful Olympiacos fans. However, his appearance outside Olympiacos’ offices sent an estimated 1,500 fans into a frenzy.
Cambiasso has played mostly as a midfielder, though at times he has fallen back to the defense and assumed positions in the back four, particularly the central defense, and is therefore usually considered a defensive midfielder.
The soon to be 35 year-old Argentinian defender has had an illustrious professional football career spanning more than 15 years and four countries. Among his greatest accomplishments was winning the treble -the League, Cup and UEFA Champions League- with Inter Milan during the 2009-2010 season under the management of Jose Mourinho. Cambiasso is considered to have played an integral role in the team’s success.
He also won the 2002-2003 Spanish league with Real Madrid.
His last club was Leicester F.C., whose supporters chose Cambiasso as the team’s best player this past season. The Argentinian opted not to renew his contract with the club though Leicester did make him an offer.
Cambiasso, who has played 52 times for Argentina’s national team, is the second prolific Greek Super League singing this summer, after Michael Essien moved to Panathinaikos F.C. in June.

For thousands of years, Greek honey has been collected for its delicious, sweet taste and healing, nutritious properties.
Cyprus