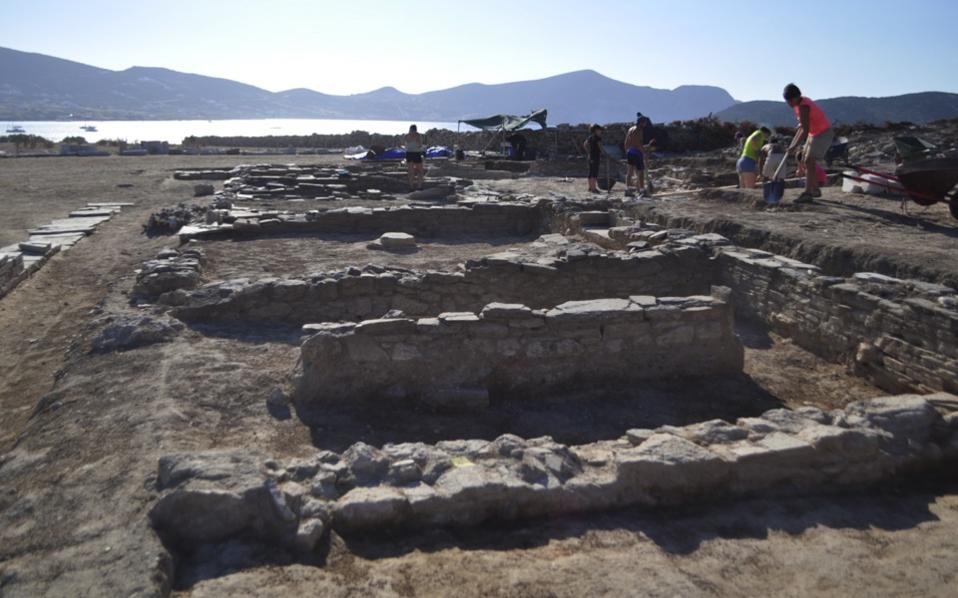 New excavation work at an Archaic sanctuary site on an Aegean Sea islet unearthed important findings about its size and organization, Greece’s Culture Ministry announced on Wednesday.
Excavations on the small uninhabited islet of Despotiko –located off the popular island of Antiparos— have started in 1977 when archaeologists unearthed a large religious sanctuary dating to around 6th Century BC. More intensive work between May and July this year has led archaeologists to important findings about the sanctuary’s organization, the Ministry said.
Findings date as far back as the 8th and 9th Century BC. The sanctuary seems to have been devoted to god Apollo, as the traces of religious worship indicate.
So far, archaeologists have discovered 13 building structures but the latest finding, an ornate facade of a structure measuring 35 meters by 15 meters, is of great importance, the Ministry said. It suggests that the sanctuary was extended and rebuilt several times during the Classical and Hellenistic periods.
Among the archaeologists‘ new discoveries is a large, four-room building on the site’s west section. A large stone altar was found in one of the rooms as well as pottery fragments bearing inscriptions with Apollo’s name.
Another important discovery is a long wall stretching from what would have been the islet’s ancient port to the site of the sanctuary. Archaeologists believe the wall would have served as fortification.