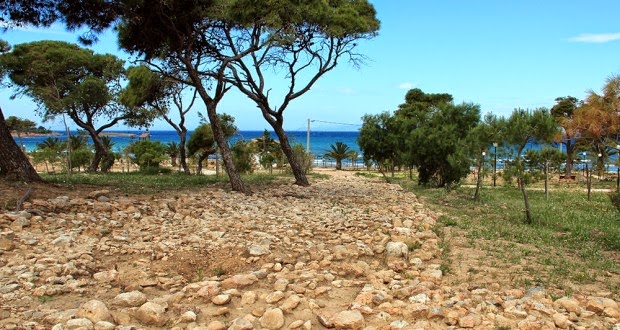 Greek Culture Ministry officials recently announced that archaeologists discovered a 300-meter long stretch of an ancient carriage road during excavations at Megalo Kavouri beach in Vouliagmeni, Athens.
The ancient pathway, which is approximately 300 meters long and 1.90 to 6.10 meters wide is considered to have been used during the 4th century BC to connect the ancient municipality of Aixonidon Alon to the ancient port.
The carriage road, which was paved with stones and supported by retaining walls on both sides, was connected to a greater road network that included a road linking Athens with Sounion and a road from the Faliro coast to Voula.
The excavation process is carried out under the Ephorate of Antiquities of Western Attica, Piraeus and the Islands, initiated at first as a general part of an NSRF-funded project aiming to improve the area of Megalo Kavouri and later funded by Greek shipowner Athanassios Martinos.