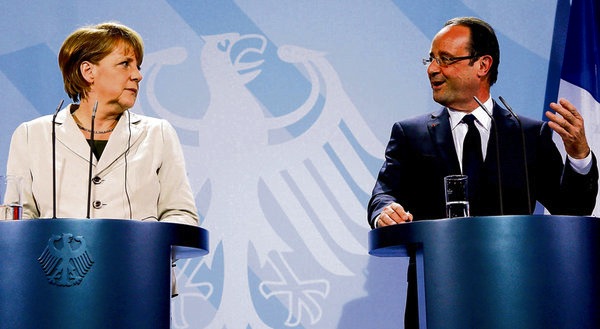 German Chancellor Angela Merkel and French President Francois Hollande held a joint press conference where they addressed the result of the Greek referendum, following their meeting in Paris on Monday.
The two leaders said they respect the Greek people’s vote and noted that the negotiation door is still open but also warned Greek Prime Minister Alexis Tsipras that he must present serious proposals during Tuesday’s Euro Summit.
“Europe is a whole that has been based on values,” said Hollande and added “In this Europe there is space for solidarity…There is however also a balance between responsibility and solidarity, which should be the guiding line in the next few days.”
Hollande also stressed that there is not much time left and the issue needs to be immediately resolved.
Merkel emphasized that Tsipras needs to present very specific proposals at the Euro Summit that will help Greece recover, as the necessary preconditions to reach a deal are currently not being met. Moreover she questioned how the eighteen Eurozone members will react to Greece’s choice and she noted that the offer Greece rejected was generous.
“We will respect the Greek government and referendum but we will also equally respect the other eighteen [Eurozone member-states]. This is democracy,” the German Chancellor said. “We are a society. We have one currency. We want to preserve it. However, everyone needs to take on this responsibility.”
Germany and France are the largest holders of Greek debt, with 68.2 billion and 43.8 billion euros respectively.