A Greek Summer Music Festival for Every Taste 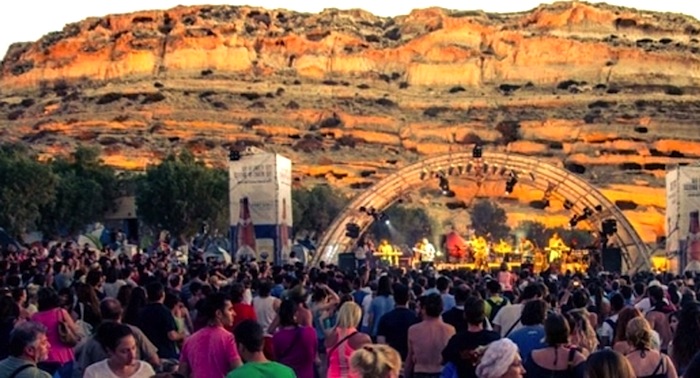 Greece has always been associated with summer, amazing beaches and crystal clear waters. Still, many people opt to travel to other countries during the summer months in order to attend one of the numerous music festivals that take place across Europe and the rest of the world.
However, Greek music festivals are growing and quickly becoming the place to be during the summer months. Thanks to the country’s amazing weather, the outdoor summer festival season starts in June and ends in September, while the numerous festivals can satisfy every taste.
EJEKT Festival
Ejekt Festival takes place annually at the Olympic Water Polo Complex in Faliro, Athens (Plateia Nerou). This year, on July 15, Parov Sterllar will take the crown on an electrified musical journey, along with American electro house musician Steve Aoki, Swiss band Kadebostany, Glasgow band Glasvegas and Moon Duo, consisting of guitarist Ripley Johnson and Sanae Yamada. The final lineup for the festival will be announced over the next months and it’s expected to include more bands and solo artists.
Rockwave Festival
Rockwave Festival is an event that takes place in Malakasa, Greece, just a short drive from Athens. What started out as a small rock festival in 1995 has turned into one of the most popular festivals in Greece. Rockwave’s popularity increased significantly in 2004 when the organizers found a permanent space to host the even at TerraVibe Park in Malakasa. The 20th Rockwave Festival will take place on May 30, June 20, July 4 and July 21 while its lineup will include The Black Keys, Robbie Williams, The Prodigy, Manu Chao and Judas Priest.
River Party
River Party is one of the oldest music festivals in Greece and this year will celebrate its 37th anniversary. It’s a five-day camping event that takes place in Kastoria, northern Greece, on the coast of Haliacmon river. It usually features great artists from the Greek music scene, as well as foreign artists. It was established by the locals in Nestorio, Kastoria, and over the years it became more and more popular. The festival is usually attended by a total of 50,000, many of whom camp near the river bank for a whole week in order to enjoy the musical feast. Some of the most notable names in this year’s lineup include: Slovenian electronic artist Gramatik, Greek hip-hop group Active Member and several Greek singers such as Giorgos Mazonakis, Kostis Maraveyas, Sokratis Malamas and Alkinoos Ioannidis.
Plisskën
Plisskën Festival – the successful event that started out in 2010 in Athens – prides itself for its genre-defying philosophy and aims to embrace music from a diversified background. The festival has grown over the years, while it has featured more than 130 international artists during its four-year run. It usually starts in the evening and continues until the small hours, while guests have the opportunity to choose between various stages. This year, Plisskën will take place at the Foundation of the Hellenic World on June 5 and 6. Greek and international artists including Brodinski, Mogwai, The Horrors, Ariel Pink, Beardyman and Mudhoney will be featured in the 2015 lineup, promising a magical journey to music lovers.
Dreamland
Dreamland was established in 2014 and it’s one of the most recent and successful festivals, following in the footsteps of Tomorrowland, an annual electronic music event that takes place in Belgium. In Greece, Dreamland takes place in the area of Ancient Olympia from Thursday, July 23, to Sunday, July 26. More than 40 artists from Greece as well as abroad will be performing during the four-day event, including Ace 2 Ace, Agent Greg, Argento, Angel Stoxx, Bang La Decks, Cayetano, Christos Fourkis, Future Keys, George Siras, House Twins, Leon Segka, Manolaco, Mikee, PapNik, Postriper, Pasquale, Zenn and 12 Tones.
Matala Beach Festival
Matala Beach in Crete is the perfect place for a summer laid back music festival. Admission is always free while people who decide to camp during the three-day festival, will have to pay 9 euros per person. For the fifth consecutive year, the organizers have assembled an impressive lineup, including foreign and Greek artists that will excite the audience and offer a magical experience. From Friday, June 19, to Sunday, June 21, Matala Music Festival will welcome artists such as Lakis Papadopoulos, Nikos Ziogalas, Dub Inc, Imam Baildi, Nikos Portokaloglou, Kostas Bigalis and Polina.
Ardas Festival
Ardas Festival was established in 1995 by a group of young Greeks, originating from Kastanies, northern Greece. The festival founders had a dream: to create a music-camping festival that would take place in the river bank, near the three-border area between Greece, Turkey and Bulgaria that would become a cultural meeting place for young people from the three countries. Twenty one years later, their dream still lives on, while Ardas Festival is becoming more popular each year. The event will take place from July 21 to July 26 and the final lineup will be announced in the coming days.