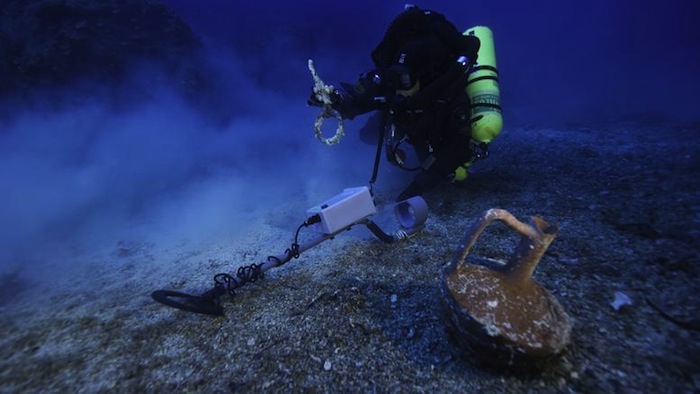 An international archaeological expedition diving at the site of the Antikythera shipwreck in southern Greece has received the green light to continue its investigation in the area for the next five years, it was announced on Friday.
The Greek Central Archaeological Council (KAS) approved the new test excavations which will focus on areas where a large number of pottery or metal objects have been discovered and in places where archaeologists have discovered evidence of one or two more shipwrecks.
The last expedition, which was launched in 2012, was a collaboration between the Hellenic Ephorate of Underwater Antiquities and the American Woods Hole Oceanographic Institution (WHOI). During the first year of the expedition, archaeologists discovered and pulled up — among other things — a segment of an anchor and a lead joint from a Roman anchor.
In 2013, the team completed a bathymetric chart of the island and the wreck’s location to determine the possible existence of a second Roman wreck close to the first one. During that investigation, archaeologists pulled up an anchor, a tile and an amphora, while in 2014 the team captured a digitized three-dimensional location of the wreck. Then they identified and pulled up two sections of a bed decoration and a bronze spear with a solid stem and lower tip.
The cooperation between the Ephorate and WHOI is very important because of the latter’s specialized technical infrastructure, which allows deep sea research. The Institution also has at its disposal a new robotic diving apparatus called the Exosuit. This enables its occupant to dive at a depth of 300 meters without the need for decompression.
The excavation is led by Dr Angeliki Simosi, head of the Ephorate, and WHOI’s marine archaeologist Brendan Foley.
(source: ana-mpa)