Speaker of the Hellenic Parliament: ‘Each Child Born in Greece Owes €32,500’ 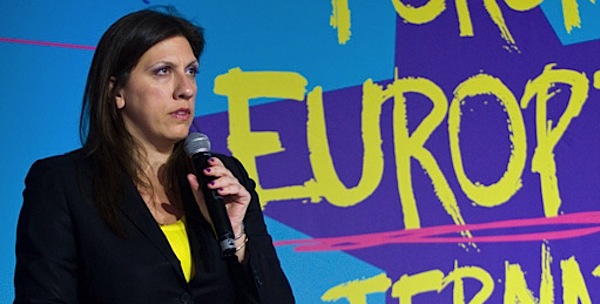 Greek human rights lawyer, politician of the Coalition of the Radical Left (Syriza) and current speaker of the Hellenic Parliament Zoi Konstantopoulou said that each child born in Greece owes 32,500 euros taking the podium at the “Forum européen des alternatives” held in Paris on May 30-31.

During the forum organized by leftist, progressive and ecological political forces, movements and collectives, Zoi Konstantopoulou pointed out that Memoranda and austerity policies impinge on the values of democracy, social justice and legal rules, saying: “Austerity kills society and democracy. We must stop it, before it kills hope and young generations. Each child born in Greece owes 32,500 euros and this is injustice.”

The speaker of the Hellenic Parliament also mentioned: “The solidarity of peoples will defeat the plans of heartless technocrats. The battle Greece is giving is a battle for all nations of Europe for democracy, freedom and dignity, and it is a battle that must be won.”

During her visit Konstantopoulou had meetings with the President of the Party of the European Left and General Secretary of the French Communist Party Pierre Laurent, as well as the former executive of the Swiss bank HSBC Herve Falciani.

Giorgos Hatziparaskos, an 86-year-old baker from Crete, is one of the last people who creates the iconic Greek phyllo dough by hand.
Diaspora